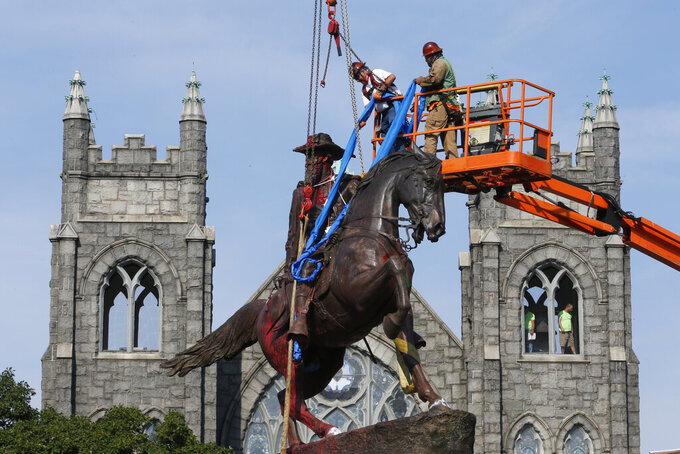 Steve Helber, ASSOCIATED PRESS
FILE - Crews attach straps to the statue Confederate General J.E.B. Stuart on Monument Avenue Tuesday July 7, 2020, in Richmond, Va. A Virginia special prosecutor has found no wrongdoing in the awarding of a $1.8 million contract for the removal of Richmond's Confederate statues last summer. The prosecutor said in a news release Wednesday, July 28, 2021, that he had reviewed the findings of a state police investigation and found no criminal activity. (AP Photo/Steve Helber, File)

RICHMOND, Va. (AP) — A Virginia special prosecutor has found no wrongdoing in the awarding of a $1.8 million contract for the removal of Richmond's Confederate statues last summer.

Timothy Martin, the elected prosecutor in Augusta County who was appointed to handle the matter, said in a news release Wednesday that he had reviewed the findings of a state police investigation and found no criminal activity.

The investigation into the contract, which was awarded to the owner of a construction firm who had made modest political donations to Democratic Richmond Mayor Levar Stoney, was initiated after complaints from a political rival of Stoney's in the middle of an election season.

Jeffrey Breit, an attorney for Stoney, said Thursday the mayor is pleased with the findings.

“It is exactly what I said in July of last year,” Breit said, calling the investigation an attempt to “throw a political bullet in the middle of a campaign.”

The investigation found that Stoney did not suggest the contractor, Devon Henry of Newport News-based Team Henry Enterprises, Martin wrote.

The investigation also affirmed the mayor's previous assertions that the city reached out to a number of contractors to do the work, all of whom refused, according to Martin. Some either personally objected to the statue removal or feared that removing the monument posed a security risk, he said.

Martin noted that the high value of the contract also attracted scrutiny. He said that while the lack of competition likely drove up the price, taking a profit in a transaction with a government entity is not criminal.

Stoney’s administration initially declined to answer questions from reporters about who was behind a shell company, NAH LLC, that records showed the city had contracted with for the removal of the statues. News outlets later uncovered through public records requests that NAH was linked to Henry.

Martin wrote that while the concealment of the contractor's identity led to suspicion “as to whether this was done in order to conceal an improper transaction” the facts don't support such a conclusion.

“Because tensions were running so high at the time, and many people expressed passionate opinions about the proposed removal, the contractor chose to keep his identity hidden, which is not a crime," Martin wrote.

In a statement, Henry said he was pleased the investigation had concluded and “this politically generated dark cloud can be removed.”

Henry — whose firm recently handled the removal of several monuments in Charlottesville, including the equestrian statue of Robert E. Lee at the center of the violent Unite the Right rally in 2017 — said he was proud of his team's work in Richmond on “a complex and potentially dangerous job.”

Henry, who is Black and has said he formed the shell company for safety and privacy reasons, told The Associated Press last year that he faced death threats after his identity was made public.

Martin said in the news release that in the interest of public confidence, he wanted to emphasize that unlike the mayor, he is a Republican from a conservative jurisdiction.

“I have no bias in favor of him based on some shared ideology or members in the same political party. I have no personal relationship with him, as the two of us have never met,” Martin wrote.

A court appointed Martin to handle the review of the state police investigation at the request of the commonwealth's attorney for Richmond, Colette McEachin. She initially declined to take up the matter, citing a donation Henry had made to a political campaign of her husband, U.S. Rep. Donald McEachin, when he was running for state senate.

Henry's team removed most of Richmond's Confederate statues last summer, after protests erupted in Richmond and around the world over the killing of George Floyd in police custody. The city is now grappling with what to do with the remaining pedestals, some of which are enormous.

Richmond, which was the capital of the Confederacy for most of the Civil War, was dotted with Confederate tributes.

One of the city’s largest Confederate monuments, a statue of Lee along historic Monument Avenue, is still in place. The monument is the property of the state, and Democratic Gov. Ralph Northam’s plans to remove it have been tied up in court. The governor’s administration is awaiting a decision from the Virginia Supreme Court about whether the piece can come down.

The court heard arguments in June and could rule at any time.