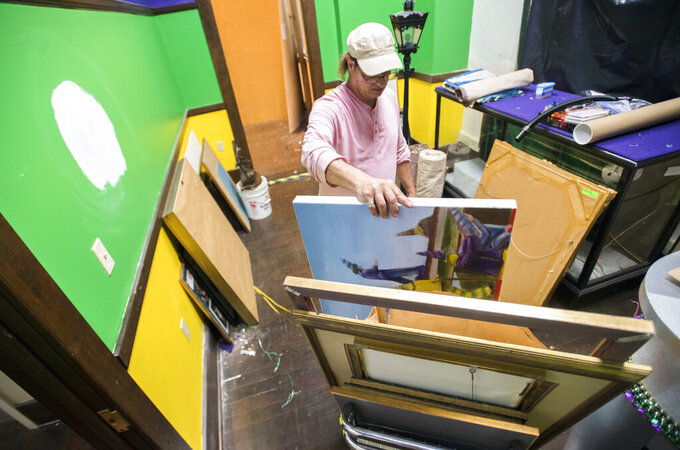 Leslie Westbrook, ASSOCIATED PRESS
David Faulk, director of the Mardi Gras Museum of Imperial Calcasieu, packs up paintings and other wall hangings from the museum, Tuesday, Oct. 12, 2021, in Lake Charles, La., to be moved to storage while the Central School Arts and Humanities Center undergoes repairs to damage following Hurricane Laura. (Leslie Westbrook/The Advocate via AP)

LAKE CHARLES, La. (AP) — In a century-old building in a long-faded part of town, the lights go on, the curtains open and a cast of tap dancers swing into action. A year ago, it wasn’t clear if this would happen again.

“We looked around and we didn’t think we’d get it reopened,” Mike Ieyoub, 59, one of the leads in a production of “42nd Street” by ACTS Theatre in Lake Charles, said before a recent rehearsal, speaking of damage to the building from Hurricane Laura.

But it has reopened, and ACTS’ production of the musical marks the first play in the former movie house it calls home since the past year’s storms.

Like so much else in the city and surrounding region, Lake Charles’ cultural institutions took a beating in the four natural disasters that have hit southwest Louisiana over the last year, beginning with Laura in August 2020. From damage to the historic building that serves as the city’s main art gallery — ruining a high-profile exhibition — to destroyed venues and a shuttered museum, it’s been a long road back for cultural flag-bearers.

It’s an aspect of this city that’s often overlooked. To outsiders, the Lake Charles area is principally known for its industrial plants and casinos; it’s a working-class town splitting the difference between Louisiana and Texas.

But its small theaters, zydeco musicians and art galleries have helped provide a sense of community to the roughly 80,000 people who live here — as well as a reason to remain at a time when storm recovery has come to feel like an unending slog.

“Living in Lake Charles is kind of tough these days, but I think the more that we’re able to restore our festivals and fairs and open our cultural institutions and attractions, the better chance we’re going to have of keeping our residents,” said Matt Young, the city’s cultural affairs director. “And not just keeping them, but giving them a great quality of life.”

One glimpse of the strange state of the city and its cultural venues after the storms could be seen recently at a former school building in downtown Lake Charles. The seats of the auditorium were filled with elaborate headdresses belonging to the region’s Mardi Gras Museum, waiting to be carted off so repairs can take place at the building.

The Central School building, built in 1912 and restored as an arts and humanities center in the early 1990s, saw heavy roof damage, with its 45 AC units “tossed around like dice,” said Young. In addition to the Mardi Gras Museum, the building also served as a base for a myriad other community organizations, including the Children’s Theatre, the Lake Charles Symphony and others.

The building had around $2.5 million in damage to its interior, where repairs are now set to begin.

Laura also took a toll on the roof of nearby Historic City Hall, whose clock tower stands out as a jewel downtown. Transformed into an arts and cultural center around 20 years ago, the building was hosting a series of exhibitions when Laura tore through, including one of early 20th century masters such as Joan Miro and Salvador Dali.

That exhibition, which was on the third floor and included original prints and lithographs, was ruined. Young said the city wasn’t expecting such roof damage considering the way the building had held up in the past, including for Hurricane Rita. Elizabeth Morrow of Blair-Murrah Exhibitions, which curated and owned the display, said there was nearly $500,000 in damage, and insurance reimbursements amounted to less than a third of that.

Damage to the building itself was around $2.5 million, but it has since reopened and hosts full programs of exhibitions — always free to the public, a priority for the city across a range of events.

“There’s a different vibe at a free public event than there is at a ritzy fundraiser,” said Young. “There’s people in shirts and ties standing next to people who are barefoot, cheering for the same band. And I love that mixture of people and cultures and diversity. I think that’s what makes Lake Charles a really special place.”

One reassuring symbol for the city has been the steadfastness of a particular resident — one that happens to be an estimated 381 years old.

The gnarled Sallier Oak and its branches, extending out like the arms of a kraken, sit next to the Imperial Calcasieu Museum, which aims to preserve the region’s culture. The museum was shuttered for a year after Laura, though the tree remained as it has for centuries, sitting majestically near the road where cars speed by.

While the live oak has served as a calling card for the museum — and a spot for yoga sessions it organizes — it also hosts exhibitions that sometimes highlight underappreciated parts of the culture, including a current one on the Coushatta Native American Tribe.

“I think it’s incredibly important as far as preserving our history and our heritage,” museum director Justina Wolford said of the venue.

But while cultural institutions are providing encouragement by coming back, there have also been calls to improve upon what existed previously, particularly by widening opportunities and making the city more equitable. Residents of northern Lake Charles, a largely African-American area, have long pushed for greater investment in their neighborhoods, which straddle Interstate 10 at around the midway point between Houston and New Orleans.

Sean Ardoin, a Grammy-nominated zydeco musician and longtime Lake Charles resident, said the city should do more to showcase its Creole culture.

“We’ve not invested in north Lake Charles, and I think it’s cutting off our nose to spite our face,” said Ardoin, who comes from a family of zydeco musicians. “One hundred thousand people are passing through town every day, and they see that and they think Lake Charles is not somewhere where they want to stop.”

The city has initiated efforts to try to change what residents say have been long years of neglect in such neighborhoods, including by creating the Nellie Lutcher Cultural District to spur development in northern Lake Charles through the use of tax incentives. The district is named for the jazz singer and pianist who was a Lake Charles native.

A movement is also underway to build a new performing arts space, possibly within the district, said Randy Partin, who founded the Live Arts Venue Alliance to push for it. Partin is the former president of the Lake Charles Little Theatre, the second-oldest such group in the state, established in 1926. Its building, however, took on heavy storm damage and is set to be demolished, he said.

But for now, ACTS Theatre has been able to salvage its home, and its cast gathered there on Thursday night to ready themselves for the weekend’s performances. Director Walt Kiser took a seat in the front row, reflecting on the building’s history.

Kris Webster, president of the ACTS board, said the roof damage and accompanying leaks were mostly over the stage and dressing room areas. Further repairs remain necessary, but those involved said the building is in sufficiently good condition to host performances.

Ieyoub and Kristen Harrell, who play the leads in “42nd Street,” said audiences have been especially enthusiastic, in part due to the return to normalcy the performances represent. The production has also provided an outlet for cast members dealing with their own storm-related stress.

“For a lot of us who grew up doing it, myself included, it’s like, ‘I can tap again’,” said Harrell, 38. “Coming back together and just having fun.”

But personal rebuilding concerns are never forgotten for long. More than a year after Laura, Harrell mused: “I’m supposed to get a roof next week.”