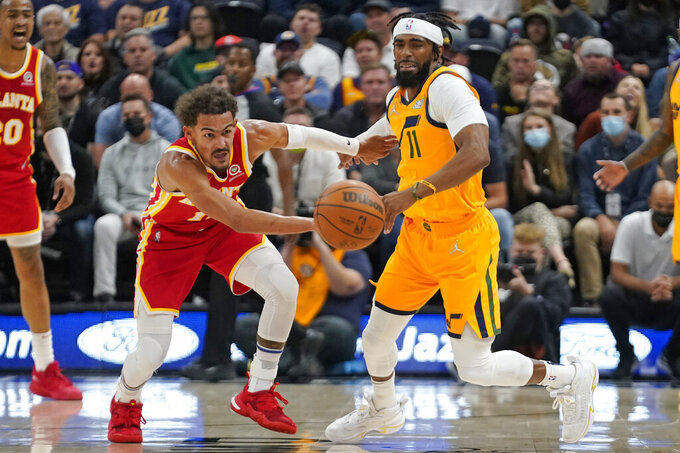 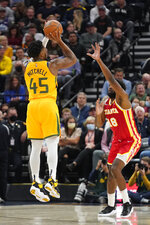 Mitchell scored 27 points to lead the Jazz to a 110-98 victory on Tuesday night.

Mitchell went 11 for 20 from the field, his second-most efficient shooting performance of the season.

“It’s less about running the team and managing the game as it is making the right play,” Jazz coach Quin Snyder said. “He’s capable of doing a lot of things on the court whether he’s off the ball or he’s handling the ball.”

Utah held Atlanta to just two baskets over the final 6½ minutes. Those late stops made a difference in a game where the Hawks shot 51% from 3-point range.

Kevin Huerter scored 28 points and Trae Young added 27 for the Hawks. Still, neither player scored a point in the fourth quarter.

“It just started on the defensive end,” Mitchell said. “We were making shots, we were going back and forth but when we really honed in on our defense and got stops going, it busted the lead open.”

Cam Reddish had 16 points, while Clint Capela finished with 13 points and 12 rebounds.

Atlanta dropped its fifth straight game, and the strain of the long losing streak is already starting to show on the Hawks.

“A lot of people are frustrated,” Huerter said. “I think that’s the right word. I don’t think we expected to be in this position. But we’ve put ourselves in a hole and we have nobody been to blame but ourselves. Gotta be better defensively.”

The Jazz scored baskets on seven straight possessions at one point in the second quarter and shot 12 of 18 from the field during the period to break open a close game.

Mitchell and Mike Conley bookended an 8-0 spurt with 3-pointers to give the Jazz a 62-45 lead heading into the final minute before halftime.

Atlanta nearly erased the deficit entirely with an 11-2 run to open the third quarter. John Collins, Huerter, and Young hit 3-pointers on three straight possessions to punctuate the spurt and trim Utah’s lead to 64-61.

Mitchell took over to prevent the Hawks from taking their first lead since the first quarter. He made a pair of baskets and fed Gobert for a dunk to help the Jazz extend their lead to 75-64.

Huerter hit a fadeaway jumper as Atlanta cut the deficit to 82-75. Mitchell and Royce O’Neale drove for back-to-back layups to ignite a 13-2 run that snuffed out the Hawks’ comeback attempt. Conley capped the run with a layup that put Utah ahead 95-77.

Atlanta made one last run and cut the deficit to 100-93 after Lou Williams sank a 3-pointer and fed Capela for an alley-oop layup. That’s as close as the Hawks got. Back-to-back 3s from Mitchell and Clarkson, followed by a turnaround hook shot from Hassan Whiteside, boosted the Jazz lead to 108-93 with 5:19 left.

“In the fourth quarter we just could not get the ball to go down,” Hawks coach Nate McMillan said.

Jazz: Conley made at least one 3-pointer for a 52nd consecutive game. … Bogdanovic went 4 of 4 on free throws and is shooting 95.7% from the line through 12 games. … Utah finished with a 42-34 advantage in rebounds.

Utah shot better than 80% from the free throw line for the seventh time in 11 games. The Jazz went 13 of 16 on their free throws. Five Utah players are shooting at least 90% from the line and two others are at 89%.

Young finished with six turnovers for the third time in six games. Although the Jazz only scored 13 points off turnovers, he placed the blame on his shoulders for the Hawks coming up short to Utah a second time.

“I had too many turnovers tonight,” Young said. “I can be better in my turnovers.”

Even with his recent struggles, Young is still averaging a career-low of 3.5 turnovers this season.

Hawks: Visit the Nuggets on Friday.