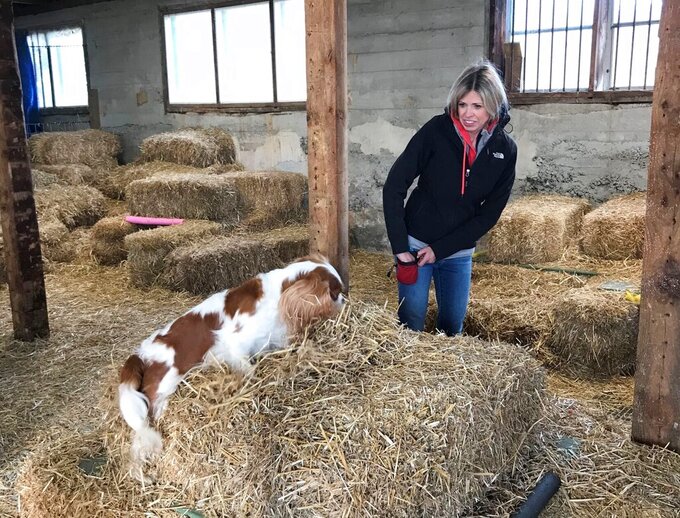 BEALETON, Va. (AP) — Some dogs sprinted like deer into the drafty barn, with its tin roof that rumbled every time the wind gusted—which it did often on a chilly Sunday afternoon.

Others did more of an amble as if they had all day to sniff every piece of straw and analyze the various aromas contained within.

But to one degree or another, just about every dog that entered the training barn at Liberty Hill Pet Resort in Bealeton smelled a rat, which is the purpose of the sport known as barn hunting.

It’s just that some dogs know better what to do about it.

Sophie, a Cavalier King Charles Spaniel, wagged her tail excitedly as soon as she entered with her owner, Sonya Baker of Manassas. Sophie looked too well-groomed to be rooting through straw and it wasn’t long before slim dried stalks hung from her silky brown and white coat.

But when she located a canister that contained a rat, she put her little paws to work to clear straw around it. The rat was safe and secure the whole time, protected in an aerated tube about the size of ones used at bank drive-thru windows.

Sophie yipped and barked with excitement especially after her owner picked up the canister. Baker held it at the level of Sophie’s nose, saying, “Git it, git it, git it,” and Sophie danced around with delight.

“It is fun,” she said with extra emphasis on fun. “The dog is in charge, it’s not like obedience or agility or rally where you’re telling them what to do. They have to tell you and my dog loves it. I guess he loves telling me what to do.”

She’s referring to Stojan, a Belgian Malinois who loves to squeeze his shepherd frame into tunnels arranged under bales of hay. She is not referring to her other dog, Juliet, a poodle whose attitude suggests she can’t be bothered with barn hunting—or any other instructions, if truth be told.

While all dogs have a sense of smell estimated to be between 1,000 and 10,000 times stronger than human’s, not all have the same strong instinct to put it to use, Robertson said.

Barn hunting gives dogs of all breeds and sizes a chance to sniff around and determine if they can zero in on one distinctive aroma and avoid dozens others. That includes the smells of other canines, dropped treats or even the barn mouse that skittered through the building a few days ago.

Dale Graham of Culpeper County named her cattle dog–Shepadoodle mix Sherlock for the way he liked to explore everything as a puppy. He showed his investigative nature as he hopped from pillar to post, looked out barn windows and licked anyone who got close to him.

Graham tried to get him on track, calling out, “No, not those rats” when Sherlock stood atop a hay bale and gazed at containers, outside the caged ring, filled with rat cannisters.

“We have a distinct lack of focus here,” she said.

Drake, an immaculately groomed black poodle, wasted no time. He pranced around the stacked-up bales, sniffing in the crevices for the distinct aroma and quickly found one. His owner, Katy Stewart of Fredericksburg, called out, “Rat.”

Robertson or Danielle Cross, a designated “rat wrangler,” let her know if Drake’s instincts were correct. What makes the game more challenging is that some cannisters contained rat bedding, not the rat themselves, and the ammonia-tinged litter can be almost as pungent as the rodent themselves.

While dictionaries consider rats and mice vermin, at Liberty Hill, they’re looked upon as pets and treated accordingly. No rats are harmed during the exercise.

Before dogs learn to barn hunt, they’re introduced to the black or dark gray animals to acquire their smell. Robertson maintains rats are almost as smart as dogs and quickly realize those after them can’t get to them.

“We used to have some rats that would jump into the tube” because they were so eager to play, Cross said.

Some of the dogs like Toby, a border terrier, had ancestors trained to find rats in fields or barns and exterminate them. Toby loves the game—it’s his kind of thing to do, said his owner Lynne Leeper of Warrenton. But he’s never shown any aggression toward the rats; he just lets her know when he’s located one.

Barn hunting is a great chance for city dogs to practice the art of hunting “without their owners needing a shotgun,” said Kathleen Reilly–Olson of Vienna.

“We love coming here,” she said. “My dogs love this place.”

One of her dogs is P.J., a Hungarian sporting breed called Vizsla that can be used for rabbit hunting or retrieving waterfowl. When P.J. entered the building, she ran so fast along straw-covered mats that she practically tripped over her long, thin legs.

P.J. participated in the tougher master’s category where one to five rats were hidden among the straw mazes and the owner had to call out “Clear” when she believed her dog had located all of them.

The event was just practice and Robertson used missed opportunities as teaching moments. She showed some owners how to be more in tune with the subtle messages dog send when they smell their prey, whether that’s tipping a head or ear a certain way or practically stopping in their tracks. And she told others how to encourage the dogs to indicate the presence of rats and not just continue on like they’re on a shopping spree.

When Liberty Hill Pet Resort conducts official barn trials Feb. 18–19, none of that will be allowed. The facility also plans more practice runs before then, when owners pay $12 to $17 for each run their dogs take through the building.