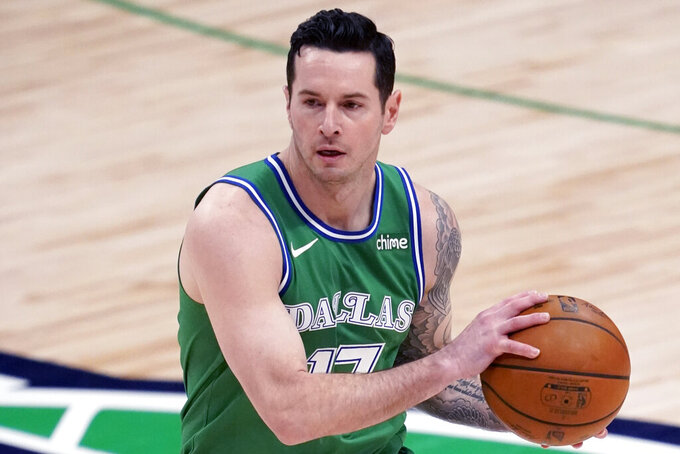 Tony Gutierrez, ASSOCIATED PRESS
FILE - Dallas Mavericks' JJ Redick makes a pass during an NBA basketball game against the Sacramento Kings in Dallas, Sunday, May 2, 2021. JJ Redick is joining ESPN as an NBA analyst a month after announcing his retirement following a 15-year playing career. Redick will make his television debut on Nov. 3 as a studio analyst during the game between the Brooklyn Nets and Atlanta Hawks.(AP Photo/Tony Gutierrez, File)

JJ Redick is joining ESPN as an NBA analyst a month after announcing his retirement following a 15-year playing career.

Redick will make his debut as a studio analyst on Nov. 3 during the game between the Brooklyn Nets and Atlanta Hawks. Besides contributing to many of ESPN's studio shows, Redick will also be an analyst on some games this season.

“After 15 years in the NBA, I am excited to take what I have learned on the court and be able to provide my insight and strong opinions about the game I love,” Redick said in a statement. “I am thrilled to have found a place on the biggest platform in sports, ESPN. I look forward to starting my post-playing career with such an incredible organization.”

Redick was the consensus national college basketball player of the year in 2006 at Duke before being drafted 11th overall by the Orlando Magic in the NBA draft. He also played for Milwaukee, the LA Clippers, Philadelphia, New Orleans and Dallas.

This isn't Redick's first foray into media. He launched his own podcast in 2015 and started ThreeFourTwo Productions last year. The name of the company is a reference to the 342 shots that Reddick made every Sunday during the offseason.

“One of our goals is to always look for opportunities to become even stronger. JJ’s unique perspective and tremendous insight further enhance the depth of our team," said David Roberts, ESPN's senior vice president for NBA and studio production. "The fact he’s played with and against some of the biggest names in the NBA is yet another attribute that will better serve NBA fans.”