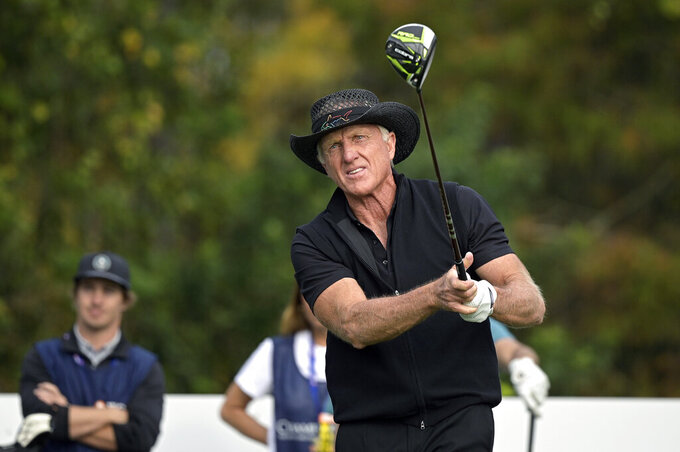 Phelan M. Ebenhack, ASSOCIATED PRESS
FILE - Greg Norman, of Australia, watches his tee shot on the first hole during the final round of the PNC Championship golf tournament on Dec. 20, 2020, in Orlando, Fla. Norman is heading up a Saudi-backed company that plans 10 new tournaments on the Asian Tour to attract top players. It could be the first step toward Norman trying again to start a world tour. (AP Photo/Phelan M. Ebenhack, File)

A small contingent of golf’s biggest names are at a tropical resort late in the season, just like 27 years ago.

There are differences between now and then, one in particular: No one should expect a contract promising riches to be slipped under their doors at Mayakoba this week along the Gulf Coast of Mexico.

Greg Norman isn’t that far along with his latest venture.

In fact, no one is entirely sure what to make of LIV Golf Investments, except that it is backed primarily by Saudi Arabia’s sovereign wealth fund and the Shark is running the show.

“This is only the beginning,” Norman said, leaving the golf world to speculate on the middle and the end.

One thing should be clear. When the conversation turns to the concept of a global golf tour that would attract the world’s best players to compete more often with hopes of growing the game in untapped markets, it’s mainly about money.

Different versions of a rebel league by any name have focused on four-man teams with the alpha player promised upward of $50 million.

For now, Norman announced last week only that his new company will pump $200 million into the Asian Tour for a series of 10 tournaments in a 10-year commitment. He also said LIV Golf Investments has secured major funding for “additive new opportunities” around the world.

Norman has been down this road before, most infamously in 1994 with his idea for a World Golf Tour. He thought he had enough support from the players until he realized he didn’t, least of all from Arnold Palmer. The King had clout.

When contracts were slipped under the doors of elite players at Tryall Resort in Jamaica during the Johnnie Walker World Championship, by then it was too late.

Norman was reminded of that failure when Rory McIlroy spoke out against the proposed Premier Golf League some 18 months ago. “I would like to be on the right side of history with this one, sort of as Arnold was with the whole Greg Norman thing in the ’90s,” he said.

Norman, in an interview Monday with Golf Digest, spoke of how he and Seve Ballesteros once kept separate schedules while sharing the same passion.

“It was the competition that we loved and wanted to be involved with on a global basis,” he said, omitting that not-so-small matter of appearance money. “We cherished and relished every tournament we played. That spurred conversations with other players: ‘What would happen if we could do this?’”

The top 50 in the world ranking come from 13 countries on all six continents where golf is played, and all 50 are PGA Tour members. They don’t compete every week, but with the majors and invitationals and limited fields, they are together a dozen or so times.

The money is not guaranteed, minus a few cocktail parties some sponsors have used to get around appearance money.

More is on the way beyond the $40 million for the “Player Impact Program.” The PGA Tour is contemplating a “global series” in the fall with big purses, no cuts and appearance money based on a player's FedEx Cup standing. It is looking into another bonus program for the top five going into the Tour Championship.

There is a greater movement to not only identify its biggest stars, but to reward them with everything from bonus pools to sponsorship arrangements with marketing partners.

Even for a PGA Tour that has been around for more than 50 years under its current name, and with a logo as powerful as any in golf, it’s still about the money.

PGA Tour Commissioner Jay Monahan already drew battle lines against a super league by telling players they can pick one tour or the other. Now he has to decide whether to grant releases for anyone wanting to cash in on the new tournaments Norman has in mind.

Norman was clever in this regard. Instead of starting a new tour, he takes over an Asian Tour that is part of the International Federation of PGA Tours, with a main seat at the Official World Golf Ranking table.

(Ranking points are important but will be substantially less than what’s offered on the PGA Tour, regardless of who or how many play the Asian Tour series. And that’s not the motivation, anyway. It’s about the money).

Not to be overlooked is the source of the funding. The Public Investment Fund is chaired by Crown Prince Mohammed bin Salman, whom U.S. intelligence determined to have approved the killing of Washington Post columnist Jamal Khashoggi, a critic of Saudi policies.

For now, Norman has a vision. He might even have a score to settle.

What he doesn’t have are players.

At some point, he will find out how many are willing to follow him and at what cost.