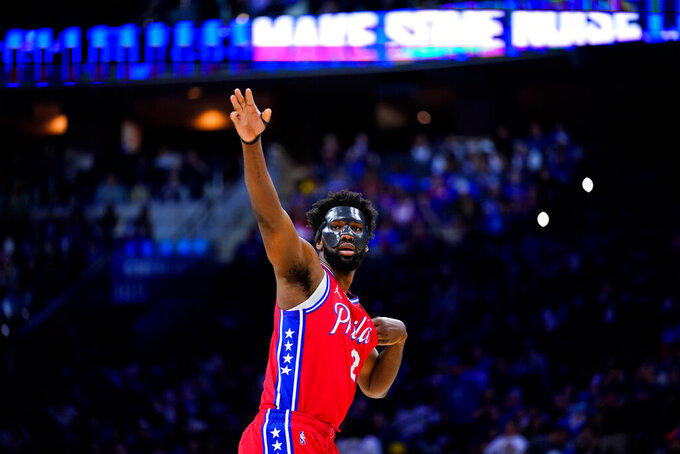 Matt Slocum, ASSOCIATED PRESS
Philadelphia 76ers' Joel Embiid reacts during the second half of Game 4 of an NBA basketball second-round playoff series against the Miami Heat, Sunday, May 8, 2022, in Philadelphia. (AP Photo/Matt Slocum)

The playoffs are getting tougher for the No. 1 seeds, and issues with their point guards are part of the reason why.

Phoenix and Miami find themselves in big-time fights now, after both took 2-0 leads in their respective conference semifinal series and then went 0-2 on the road. Game 5s await on Tuesday night — Dallas visits Phoenix, Philadelphia visits Miami — with the winners set to be one victory away from the NBA’s Final Four.

Paul had two rough games in Dallas, fouling out of Game 4, and his day got worse amid allegations that members of his family were harassed by fans at the game. Lowry reinjured his problematic hamstring in Miami's Game 4 loss at Philadelphia, casting doubt about his availability for Game 5 and beyond.

And now, best-of-seven series are down to best-of-threes, with a pair of No. 4 seeds bringing tons of momentum into Tuesday’s matchups that will be played on the home courts of West No. 1 seed Phoenix and East No. 1 seed Miami.

Maxey was talking from the 76ers’ perspective, but word for word, the Mavericks would say the same about their looming test in Phoenix.

“Now we have to figure out how to win one on the road,” Dallas coach Jason Kidd said. “But again, we’re playing the best team in the NBA right now in the Suns. We know this is a tough challenge, but we’ve just got to go out and execute and hopefully put ourselves in a position to win on the road.”

Paul averaged 8.5 points, 5.5 assists and five fouls per game in Phoenix’s two losses in Dallas. The incident with his family — a video surfaced of Paul yelling “I’ll see you later!” at a young fan, though it was not clear what transpired beforehand — left the Mavericks calling whatever happened unacceptable. But the on-court struggles happened before whatever off-court incident occurred.

“There’s nothing regular about Chris,” Kidd said. “He’s one of the best players of all time. He’ll have his team ready to go for Game 5.”

Jimmy Butler had 40 points for Miami in Game 4 and it still wasn’t enough. The 76ers dropped Games 1 and 2 in Miami, but Philadelphia coach Doc Rivers made a brilliant adjustment for Games 3 and 4: He used Joel Embiid.

The MVP finalist and scoring champion, playing with a mask after missing the first two games because of an orbital fracture and concussion, averaged 21 points and 11 rebounds in Games 3 and 4 to help the 76ers even the series.

That, combined with Miami struggling enormously from 3-point range — 14 for 65 in the two losses in Philly — has the 76ers feeling great as they head south for Game 5.

— NEED TO KNOW: Heat are 17-4 all-time in Game 5s at home, 76ers are 4-27 all-time in Game 5s on the road. It shouldn’t be a surprise that the series is even, because the teams split four regular-season meetings. James Harden had 31 points for Philadelphia in Game 4, his highest output in more than a month.

— KEEP AN EYE ON: Butler. Miami’s top player had 73 points in the two games in Philadelphia, and the Heat went 0-2 anyway. He needs help, in the form of the Heat knocking down 3-pointers again.

— INJURY WATCH: Lowry is listed as questionable. If he can't go, the Heat must figure out whether to return to their same rotation from earlier in the playoffs when they were without him or if it’s time to put Duncan Robinson in the lineup. Robinson has been out of the rotation in this series.

— PRESSURE IS ON: Miami. Biggest game of the season, bar none. Philadelphia has tons of confidence and rightly so.

— NEED TO KNOW: This is the fourth NBA playoff series for Dallas’ Luka Doncic and all have been tied 2-2 going into Game 5. The Suns are trying to avoid what would be their first three-game losing streak of the season.

— KEEP AN EYE ON: Dallas’ 3-point shooting. The Mavs were 20 for 44 in Game 4 (Mavs not named Doncic were 19 for 34). They want to continue shooting that many, if not more. Two numbers that jumped off the stat sheet Sunday were Dallas' 60-27 edge in 3-point shooting and 23-9 advantage in points off turnovers. Even Phoenix isn’t good enough to overcome two disparities like that.

— INJURY WATCH: The calf strain that slowed Doncic earlier in the playoffs no longer seems to be an issue.

— PRESSURE IS ON: Paul. He fouled out of a game for the first time this season, had more fouls than points in that game, saw his team’s 2-0 series lead become a 2-2 tie and is dealing with whatever went on with his family at Game 4. Easier said than done, but he’s got to be better in Game 5.