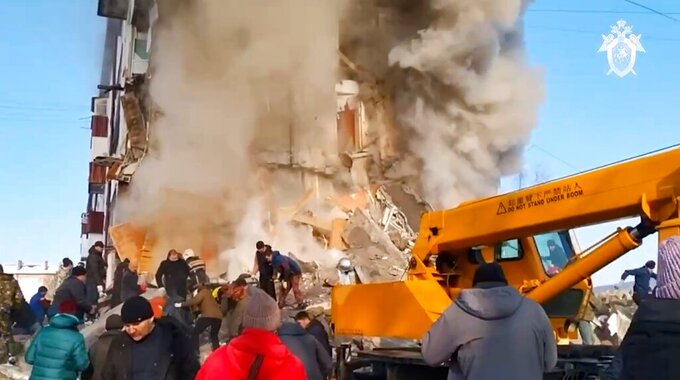 Uncredited, ASSOCIATED PRESS
This image taken from video released by the Russian Investigative Committee, shows emergency situation ministry employees working at the scene of the collapsed apartment building in Tymovskoye, 480 km (300 miles) north of Yuzhno-Sakhalinsk on Sakhalin Island in Russia's Far East, on Saturday, Nov. 19, 2022. Several people including children were killed in a gas blast that rocked a five-storey apartment building in the settlement of Tymovskoye on Russia's Far Eastern Sakhalin Island. According to local authorities, a gas cylinder exploded in one of the apartments, causing the collapse of a building section. (Russian Investigative Committee via AP)

A gas explosion in an apartment building Saturday killed at least nine people, including four children, on the island of Sakhalin in far eastern Russia, according local authorities.

A section of the five-story building in the town of Tymovskoye collapsed after a gas cylinder exploded in one of the apartments at around 5:30 a.m. Moscow time, authorities said.

Rescue teams were searching for more victims under the rubble, Sakhalin Gov. Valery Limarenko wrote on Telegram. Some of the 33 people known to have lived in the building remained unaccounted for, he said.

Sakhalin is located in the Pacific Ocean, north of Japan.

According to Limarenko, residents affected by the explosion were offered temporary shelter and families who lost their homes will be paid 500,000 rubles ($8,217). Relatives of the people killed can expect to receive 1 million rubles ($16,434), he said.