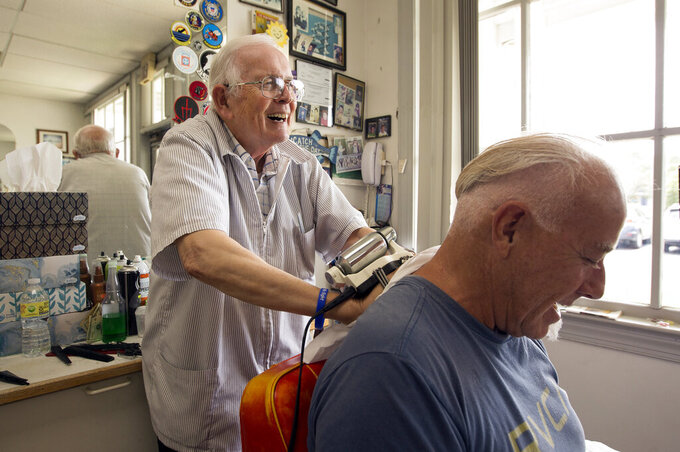 Bill Tiernan, ASSOCIATED PRESS
Paul Hughes sits as his longtime barber Hubert Davenport, 81, at Davenport's Barber Shop, massages his back during a hair cut, Friday morning, June 3, 2022, in Norfolk, Va. Davenport, known as "Mr D" to his longtime customers, has been a barber for 63 years with 57 of those years in Ocean View. He recently retired. (Bill Tiernan/The Virginian-Pilot via AP)

NORFOLK, Va. (AP) — “One last time,” said Hubert Davenport as he wrapped a barber cape around a customer’s shoulders before grabbing his scissors and shears.

“One last time,” Rand Baker, the customer, echoed with a twinge of sorrow.

A half-dozen customers trickled into Davenport’s Barber Shop on a recent weekday afternoon to get one last haircut from “Mr. D.” — the man who had cut their hair, their father’s hair, and sometimes, even their grandfather’s hair.

After 63 years, Davenport has stepped away from the chair in his Ocean View shop, and he spent his remaining time giving final cuts — and goodbye hugs — to customers who he said are more like “nephews” that he has watched grow up, become successful, raise families of their own and grow old.

Davenport, 82, said in the case of one family, “six generations have sat in my chair.” He named the third great-grandfather down to the youngest boy as he counted, his fingers crooked from decades of holding scissors. A picture frame with photos of each generation sit in a showcase so he never misses a name when telling the story.

Baker recounted how his father brought him to Davenport’s when he was a boy, and he brought his son in the years that followed.

“I used to get the flat top but I leave it a little longer now that I am thinning like most of us are nowadays,” Baker said, now 54. He did not even have to say what style he wanted — he sat in the chair and Davenport got to work.

Davenport began his life-long career in 1959 after he graduated from Twillie’s Barber School in Norfolk. He was just 18 at the time and a haircut cost $1.25. The diploma, yellow and faded, still hangs on the wall at his station.

Davenport initially worked at barber shops in the Riverview, Norview and Lakeland Shopping Center areas of Norfolk, working to build up his clientele. It took him six years to save enough money to buy his own shop in Ocean View in April 1965, which was originally in Johnson’s Square before he relocated to 9627 Granby Street, a strip mall built by W.F. “Red” Thornton Jr. right off Ocean View Avenue in 1980.

“Red was an old customer of mine and a good friend. He called me one day and told me to pick out my place,” Davenport said. While he said he wanted the end spot, Thornton nestled the barber shop in the middle of the strip.

Thornton’s son, Billy, is among those who have come to Davenport for decades. He stopped by the shop after lunch recently to get his last “Mr. D. haircut.”

“Dad said to make sure Mr. Davenport had everything he needed,” said Billy Thornton. “Ocean View is a good old-fashioned community and Mr. Davenport is part of the glue that holds it together.”

In his six-plus decades, Davenport says he “has seen it all” when it comes to hairstyles.

“When I first started we had what you called the ‘boogie woogie flat top’ — which had the sides left long. We had the regular businessman cut, and children’s cuts were always close on the sides,” Davenport said. “And then the Beatles came along.”

Young adults began wearing their hair longer, for which Davenport says he went back to school to freshen up on his techniques. Then came the “Willoughby sting” — known to most today as the “rat tail.”

“The boy wanted his hair cut short, but he wanted to leave something left in the back. I called it the ‘Willoughby sting’ — like the old stingray tail,” Davenport said.

The inside of Davenport’s Barber Shop is also something of a museum. Photographs of military ships, paintings from local artists and baseballs signed by barber shop-sponsored youth teams line the walls and shelves — most gifted to him by customers over the years. Among the photos is one of a Navy admiral shaking the hand of President George W. Bush. Along the bottom reads: “Handshake by George W. Bush; haircut by Davenport’s Barber Shop.”

“I cut the admiral’s hair, but the president did not have time for me to cut his hair,” Davenport said with a laugh.

Over the years, Davenport cut hair regardless of where clients could meet him, often closing his shop early to make house visits.

“They were there for me, coming to my shop and helping me make a living, so I was there for them when they needed me,” Davenport said.

One such client was Kurt Hampe, who climbed into Davenport’s chair last week. Like for most customers, Davenport has cut the Hampe family’s hair for more than 30 years. In 1990, when Hampe was diagnosed with cancer, Davenport paid him a hospital visit, toting his kit to give Hampe a fresh haircut.

“You will never find another Mr. D.,” said Gail Hampe, Kurt’s wife. “It was a real touch-and-go situation for a while. I had come in and talked with Mr. D. and he came out to the hospital after that.”

As he cut Kurt’s hair, Davenport asked about the couple’s two sons. The Hampe boys, who are 25 and 30, have had their hair cut by Davenport since they were kids.

Richard Richmond waited for nearly an hour for his last haircut with Davenport. When he finally hopped in the bright red chair, he said “Mr. D., I did not know you were retiring. Who is going to cut my hair now?”

Now in his 30s, Richmond has been coming to Davenport since he was 5.

“I remember he used to have a toy box that looked like a football,” Richmond said, before Davenport pointed to the same toy box, which was moved to another corner of the shop.

“Yep, you used to play in that when you were a kid. Probably some of the same toys that you played with are still in there,” Davenport said with a laugh.

Before Richmond left, Davenport gave him a hug and told him how proud he was of him.

While Davenport is retiring, the shop won’t entirely close. A new barber will take over Davenport’s station. After receiving multiple offers, Davenport decided to sell the business to Dante Abitria, who owns Springs Barber Shop on Diamond Springs Road in Virginia Beach.

“I chose the one that wanted to continue this as a neighborhood barber shop. I could have sold to a feller who wanted to change the inside and jack the prices way up, but I did not want to do that. The good Lord sent me the right one — so that is why I sold,” Davenport said.

While several of Davenport’s longtime customers said they are holding out hope that he will only briefly retire, Davenport said “it is time.”

“The business is the good Lord’s and he has just blessed me with it. He let me work for a long time — 63 years,” Davenport said. “But I have stood on these legs so long they are crying. My mind says no, but my old body says yes.”