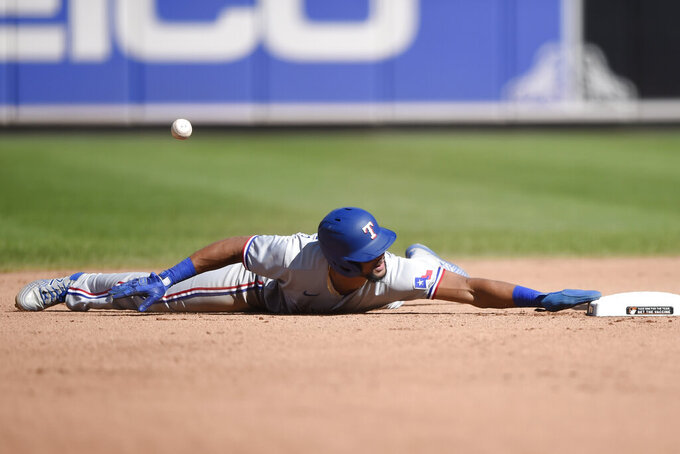 Gail Burton, ASSOCIATED PRESS
Texas Rangers' Jose Trevino is safe at second base on a steal against the Baltimore Orioles in the seventh inning of a baseball game Sunday, Sept. 26, 2021, in Baltimore. (AP Photo/Gail Burton)

BALTIMORE (AP) — Andy Ibáñez hit a two-run homer and the Texas Rangers avoided their 100th loss for at least a day by beating the Baltimore Orioles 7-4 Sunday for a four-game split.

​​Adolis García had two hits and drove in a run for Texas. He set a club rookie record with 256 total bases.

The Rangers finished 24-57 on the road, their lowest winning percentage away from home since they were 22-59 in 1973.

“We've had our struggles and we've had some tough road trips, obviously,” Texas manager Chris Woodward said. “If we're going to contend over the course of the season, we have to play better on the road.”

Anthony Santander and Pedro Severino homered for the Orioles, who went 4-3 against the Rangers and won their first season series against them since 2017. Baltimore dropped to an AL-worst 50-106, competing with Arizona for the top pick in next year's amateur draft, and is 176-364 over the last four seasons.

Rangers reliever Jharel Cotton (2-0) allowed one hit in 1 2/3 scoreless innings. After Severino hit a two-run homer off Kolby Allard in the ninth and walked Jahmai Jones with two outs, Joe Barlow struck our Ryan McKenna for his ninth save in 10 chances.

Ibáñez gave the Rangers a 2-0 lead in the fourth with a two-run homer off left-hander John Means (6-8), who allowed three runs and seven hits in five innings with eight strikeouts. He threw 108 pitches, his second-most of the season.

“It was not a very sharp outing,” Means said. “I wasn’t getting ahead. The changeup was good early but I lost it late.”

Santander's two-run homer tied the score in the bottom half off Dane Dunning, making his fourth appearance and second start since being reinstated from the COVID-19 injured list on Sept. 10. Dunning allowed two runs and a career-high five walks over 4 2/3 innings.

“I wasn't as efficient today as I've been in the past, but we're definitely headed in the right direction,” Dunning said.

Texas retook the lead in the fifth on an RBI double by García hit a go-ahead double in the fifth. Leody Taveras led off the seventh with a single off Eric Hanhold, stole second, and scored on Isiah Kiner-Falefa's single.

Willie Calhoun greeted Fernando Abad with a two-run triple with two outs in the eighth and scored on Charlie Culberson's single.

‘The Orioles didn’t shift me at all this series, which means a lot to me because it says I can use the whole field," Calhoun said.

Baltimore’s ​​Austin Hays was 0 for 3 with a walk, ending an 11-game hitting streak.

Garcia is the eighth rookie in MLB history to have at least 30 homers, 80 RBIs, and 10 stolen bases in a single season. The first seven players to accomplish that feat won Rookie of the Year awards.

Orioles: RHP Chris Ellis left the game Saturday night with shoulder soreness. Ellis also had his start pushed back from Tuesday due to arm fatigue. Manager Brandon Hyde said Ellis could be shut down for the season. ... OF Cedric Mullins was held out of the lineup for a second consecutive day with hamstring tightness, but hit into a forceout as a pinch-hitter in the seventh.

Orioles: LHP Bruce Zimmermann (4-4, 4.83 ERA) gets the start Tuesday against the Red Sox. Zimmermann hasn’t pitched for the Orioles since June 13 because of an ankle injury.