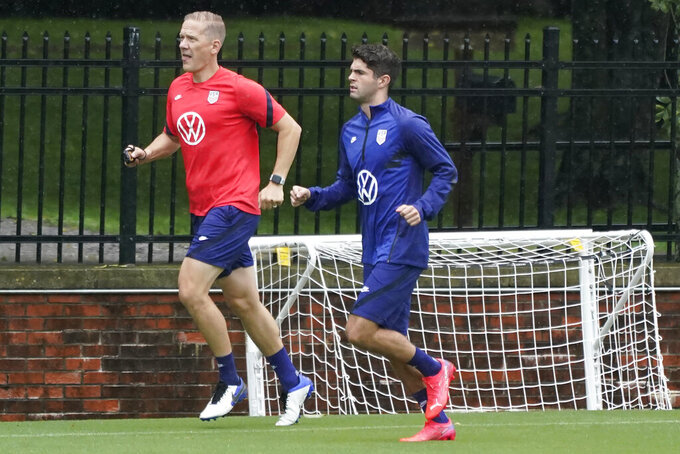 NASHVILLE, Tenn. (AP) — Brenden Aaronson played last weekend at Hartberg, Austria, drove to Munich, then flew to New Jersey and on to Tennessee. His first 11 days of September include games in El Salvador, Nashville and Honduras as the United States starts World Cup qualifying, then a return to Europe for a club road game at Swarovski Tirol.

Hurtling ahead is the life of the 20-year-old midfielder. In less than three years, he has moved from second-tier Bethlehem Steel to Major League Soccer’s Philadelphia Union to helping RB Salzburg win an Austrian league title and reach the European Champions League.

In an era when top young Americans are snatched up by European clubs at age 16, Aaronson is the epitome of a late bloomer.

“There were car rides that were not happy, just coming home from trainings where the bigger guys were just throwing him around like a little rag doll. And that went on for years,” his father, Rusty, said Tuesday. “I think he just used that as fuel.”

Aaronson is part of a new-look U.S. national team determined to rebound from the Americans’ failure to qualify for the 2018 World Cup.

“It’s not going to be a pretty match where you can play the way we want to play,” Aaronson said after the U.S. team’s first training session Monday and a nap to deal with jet lag. “We just have to be willing to fight and get the result. And like Gregg’s been saying: It’s three games. We need nine points to start off this qualifying.”

For the Aaronson family, Thursday night’s game is part of a busy 24 hours. Sister Jaden, 15, is a freshman at Shawnee High School in Medford, New Jersey, and has preseason soccer scrimmages for coach Drew Wagner, whose son J.D. is Brenden’s best friend. Brother Paxten, a defender who made his MLS debut in May, has a match against New England on Friday, eight days after his 18th birthday.

“I love paying attention and trying to help my brother out and give him tips,” Brenden said. “He’s killing it.”

Rusty Aaronson played college soccer at Monmouth, ran a risk management firm and founded Real Jersey, a youth club that is part of MLS Next system. Brenden grew up a Liverpool fan — a Steven Gerrard poster still hangs in his room at the family house.

“I was a big fanboy of Liverpool and still am today,” he said.

After ninth grade at Shawnee, he switched to YSC Academy in Wayne, Pennsylvania, a school with a soccer emphasis. His father would start the 75-90 minute drive shortly after 6 a.m. or Brenden would take a shuttle bus. He wouldn’t get home until 8:30-9 p.m.

He joined the Union Juniors when he was 10, played for the Union Academy and turned down a chance to go to Indiana for college.

After making his Bethlehem debut as an amateur in July 2017, he signed the Union’s first homegrown player contract in September 2018 and made his MLS debut the following March. Aaronson was second in voting for MLS Rookie of the Year and in October 2020 the Union announced he was transferring to Salzburg in January. He made his U.S. national team debut last December and has three goals in seven appearances.

“He’s had a fantastic season of improving his performance almost weekly,” Berhalter said ahead of Aaronson’s first U.S. appearance.

Aaronson or Konrad de la Fuente are the most likely candidates if a replacement is needed for Pulisic, who resumed training Monday.

“Brenden is a great player who is able to get the ball on the turn and drive the ball down the middle, make good passes,” midfielder Weston McKennie said.

At 5-foot-10, Aaronson is a strong dribbler and passer. Jesse Marsch, the American who coached Salzburg last season, used him on a midfield flank, as did Berhalter.

Matthias Jaissle, who took over this season when Marsch moved to sister club RB Leipzig in Germany, shifted Aaronson to the middle of the midfield, and he responded with a 90th-minute winner in the first leg of the Champions League playoff against Brøndby and another goal in the second leg last week.

Aaronson is among a record 12 Americans eligible for the Champions League, his club drawn to play Sevilla, Wolfsburg and Lille in the group stage.

Salzburg's attacking style suits Aaronson and the club has a history of developing youngsters and selling them to larger clubs, notably Sadio Mané and Erling Haaland.

Aaronson’s mother, Janell, helped him settle in an apartment in Anif, the town about 5 miles from Salzburg where famed conductor Herbert von Karajan lived. Two teammates are in the same building.

Brenden's biggest adjustment has been being on his own for the first time. Even as an MLS rookie, he lived at home to save up and drove with his father to training and matches.

“I’ve lived with family my entire life. At the start of my MLS career, I was with family,” he said. “They’re there for me through FaceTime, but FaceTime can only do so much.”