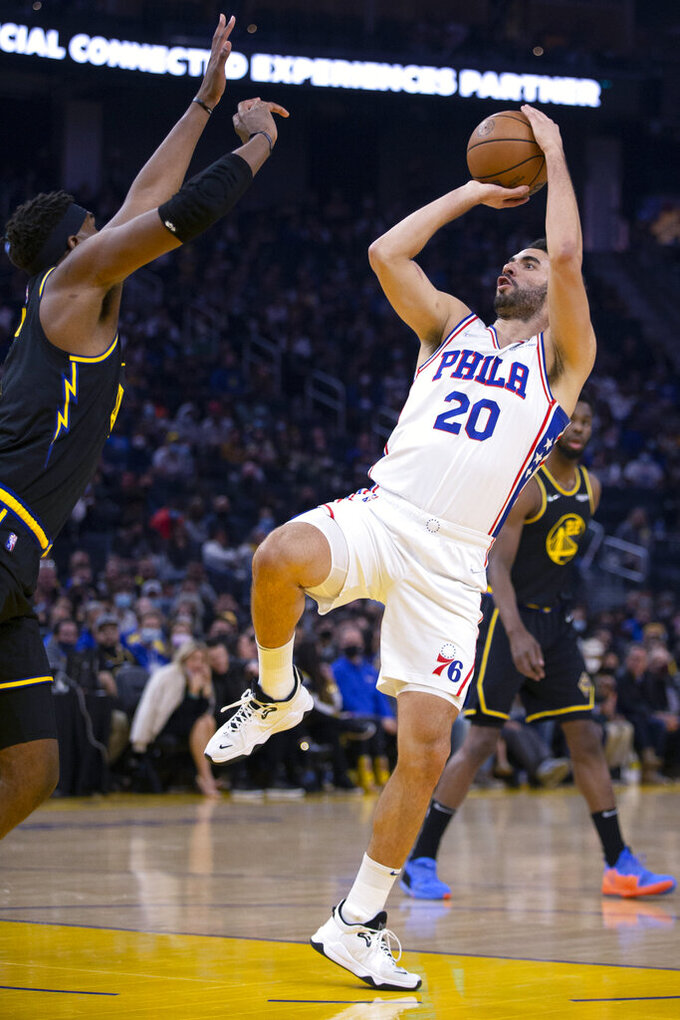 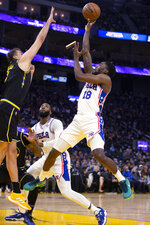 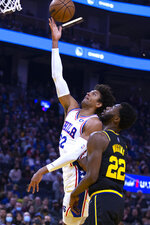 SAN FRANCISCO (AP) — Stephen Curry and his entire supporting cast had to bring some smothering second-half defense to shut down younger brother Seth and the undermanned 76ers.

Stephen Curry scored 25 points to Seth's 24, and the Golden State Warriors surged back after halftime to beat Philadelphia 116-96 on Wednesday night for their fifth straight win.

Juan Toscano-Anderson came up big off the bench in the second half, scoring all of his 13 points to go with six rebounds and six assists.

“The energy, it's contagious,” said Andrew Wiggins, who added 19 points.

Jordan Poole added 17 points and six assists for the Warriors. He beat the buzzer from halfcourt at halftime to get Golden State within 61-52. Stephen Curry was all smiles seeing one of his signature shots go down for the young guard.

The reigning scoring champion shot 9 for 16 with six 3-pointers and added 10 assists for the NBA-best Warriors (16-2). He and brother-in-law Damion Lee made consecutive 3-pointers over the final 39.4 seconds of the third to put their team ahead 86-84 going into the final 12 minutes.

“We were on our heels most of the entire first 18 minutes. Our identity is our defense. We can score with the best of them but we flipped the switch and got stops and made them take tough shots, especially in the second half and turned that into offense,” Curry said. “It was pretty impressive just the energy flip that happened after that first quarter.”

Toscano-Anderson and Gary Payton II, back after missing Sunday's game to rest his repaired hernia, led the defense as the Warriors fought back from a 19-point, first-half deficit.

“We got great performances off the bench from Gary and Juan, two of our better defenders, and the defense led to the offense and the ball started to move because we were in transition,” coach Steve Kerr said. “It was a beautiful second half.”

Seth Curry, who had been questionable with lower back stiffness, started 4 of 6 and outscored big brother 17-14 in the first half. He wound up 8 of 16 from the floor, missing all five of his 3-point tries.

Danny Green made his first four shots and scored 10 points in 17 minutes. He returned for the Sixers after missing the previous four games and seven of the last 11 with tightness in his left hamstring.

The Sixers lost for the seventh time in nine games after winning at Sacramento on Monday.

Toscano-Anderson — a week ago out of the rotation — converted a go-ahead three-point play with 9:32 remaining and Golden State immediately forced a turnover before Otto Porter Jr.’s 3-pointer moments later.

“We were locked in,” Wiggins said. “We dug ourselves a little hole. We knew to get out of it we were going to have to play harder.”

“The fourth was just a phenomenal defensive effort, 30-12,” Kerr said.

Draymond Green was hit with his fourth foul 3:10 before halftime but still contributed 10 points, nine rebounds and seven assists.

76ers: Tobias Harris missed his second straight game with a sore left hip. .... After the 76ers matched their season low with seven turnovers that led to just six points in Monday's win at Sacramento, they committed 21 leading to 38 Warriors points.

Warriors: G Andre Iguodala missed his fourth straight game and third in a row with soreness in his right knee. He is unlikely to play Friday, Kerr said, given Iguodala hasn't had any recent court time. ... Golden State has scored 100 or more points in every game — the only NBA team to do so.

The Warriors became just the second team this season to win by 20 after trailing by 19 or more, according to Elias. The Clippers did so against the Timberwolves on Nov. 5. Golden State last accomplished the feat on Nov. 2, 2017, rallying to beat the Spurs 112-92.

Rivers knows the Warriors well enough from his Clippers coaching days to realize how dangerous they are on defense when most everybody thinks first of Curry and their 3-point shooting.

“They make you fall in love with their 3 and they kill you with the 2,” Rivers said. "Then on the other end when they were a dominant team they were always one or two in defense. The attraction of the 3-point shot and some of the shots that Steph makes mesmerizes you. But they’re killing you with the 2s, and I think teams that understand that would have a better grasp of how to play them.”

Warriors: Host Trail Blazers on Friday night having won 10 of the last 12 against Portland at home.