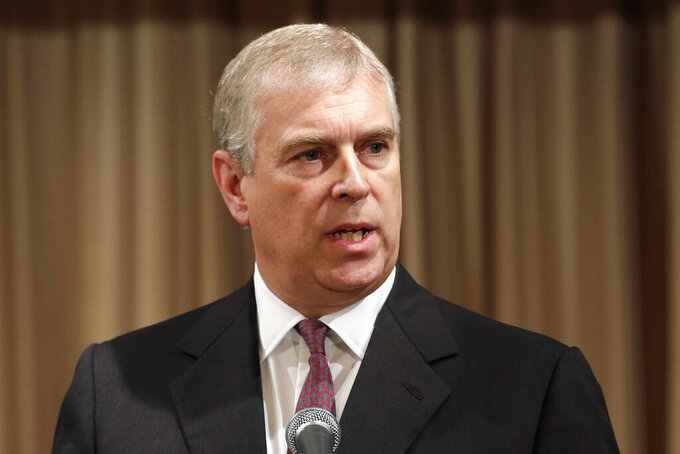 Shizuo Kambayashi, ASSOCIATED PRESS
FILE - In this Sept. 30, 2013, file photo, Britain's Prince Andrew, the Duke of York, speaks during the opening session of the Japan-UK security cooperation conference in Tokyo. A 2008 settlement agreement that a lawyer for Prince Andrew says would protect him against claims that he sexually abused an American when she was 17 can remain secret, a New York judge ruled Wednesday, Oct. 27, 2021. (AP Photo/Shizuo Kambayashi, File)

NEW YORK (AP) — A 2008 settlement agreement that a lawyer for Prince Andrew says would protect him against claims that he sexually abused an American when she was 17 can remain secret, a New York judge ruled Wednesday.

U.S. District Judge Lewis A. Kaplan made the ruling in a brief order released a day after Andrew's lawyer asked that the document remain sealed when he files arguments explaining why he thinks the judge should throw out the lawsuit. Attorney Andrew Brettler said he wanted to include a copy of the agreement with the arguments.

In the August lawsuit, Virginia Giuffre claims that the prince abused her on multiple occasions in 2001. Andrew has said he never had sex with her.

Brettler, who has called the lawsuit “baseless, ” said neither the prince nor Giuffre contend that the release agreement must remain sealed, but they requested that it stay secret because it is subject to a protective order from another judge presiding over a federal civil action in New York.

The settlement agreement was reached between Giuffre and Jeffrey Epstein, who was found dead at age 66 in his cell in 2019 while awaiting a sex trafficking trial at a New York federal jail. His death was ruled a suicide.

In his Wednesday order, Kaplan noted that the Estate of Jeffrey Epstein also does not contend that the settlement agreement must remain sealed.

Kaplan seemed to urge the parties to ask the judge in the other case — Loretta A. Preska — to agree that the document can be unsealed, saying Preska “might well view with favor an application ... to permit the public disclosure of the Settlement Agreement.”

“But that is for her to say,” he wrote, ruling that the agreement can be filed under seal and remain so unless Preska and Kaplan decide otherwise.

In his Tuesday filing, Brettler said the agreement “releases Prince Andrew and others from any purported liability arising from the claims Ms. Giuffre asserted against Prince Andrew here.”

A hearing in the Prince Andrew lawsuit is scheduled for next week.

The Associated Press does not typically identify people who say they are victims of sexual assault unless they choose to come forward publicly, as Giuffre has done.