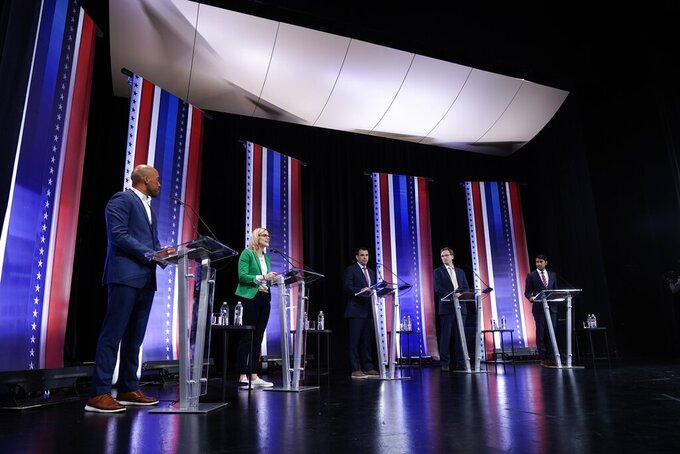 MADISON, Wis. (AP) — Top Democrats running for the chance to take on U.S. Sen. Ron Johnson in Wisconsin largely kept their focus on the Republican opponent during the first and only televised debate Sunday, while the only female candidate faulted the men for not doing more to advocate for abortion rights.

The debate bringing together five candidates came just over three weeks before the Aug. 9 primary. The winner will advance to face Johnson, who is seeking a third term, in what is expected to be one of the most costly and hotly contested races in the country with majority control of the Senate at play.

Polls show Lt. Gov. Mandela Barnes and Milwaukee Bucks executive Alex Lasry are leading the crowded field. Both Barnes and Lasry focused on Johnson, and not one another, in the debate as they advocated for getting rid of the Senate filibuster to pass a bill protecting abortion rights, passing gun safety laws, protecting the environment and tax changes to benefit the middle class.

Barnes pointed to his win as Gov. Tony Evers' running mate in 2018 over then-Gov. Scott Walker as evidence that he knows how to beat a Republican statewide. Lasry noted his union support to make the case for him to take on Johnson.

State Treasurer Sarah Godlewski, the only woman in the race, took aim at her male opponents on abortion, asking why they had not made it more of a priority before the U.S. Supreme Court last month overturned the Roe v. Wade decision, which put an 1849 state law banning abortion in Wisconsin back into effect.

Outagamie County Executive Tom Nelson, who has trailed in the polls, attacked Godlewski for not voting in the 2016 election won by Donald Trump. He narrowly carried Wisconsin that year before losing the state by nearly an identical margin in 2020.

Godlewski worked for Democrat Hillary Clinton's campaign in Wisconsin in 2016 but records show she did not vote.

“As the only woman on this stage, I don’t need to be lectured by any men about how important the 2016 election was," Godlewski said, highlighting her work for Clinton as director of outreached to women voters. “I was the only one talking about reproductive rights because for me, this is not an afterthought.”

Barnes, who last week launched a television ad featuring his mother talking about having to end a pregnancy, said he supported exploring "every option to make sure women get the health care they need and deserve.”

Lasry, who noted that his wife works for Planned Parenthood, said defeating Johnson and doing away with the filibuster is the key to passing a law protecting abortion rights.

A fifth candidate, Steven Olikara, noted his experience leading a group called the Millennial Action Project that worked to empower younger people to bridge the partisan divide. He said he was running to change the system and reduce the influence of big money in politics.

Campaign finance reports filed last week showed that Johnson raised about $7 million over the past three months, more than the top four Democratic candidates combined. Lasry, whose father co-owns the Milwaukee Bucks, loaned his campaign $6.5 million of his own money.

The Milwaukee Journal Sentinal reports that the latest campaign finance reports showed Johnson had about $2 million on hand after spending about $6.5 million on ads during the second quarter.

Lasry actually outspent Johnson at $6.7 million thanks to the personal loan although his campaign brought in only $520,000 in outside donations.