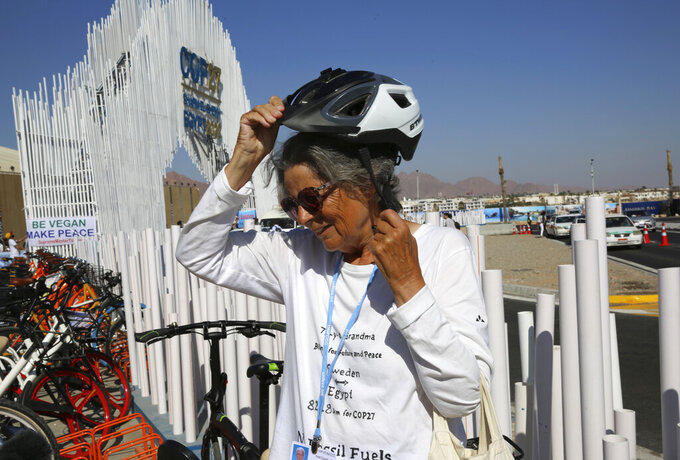 The trip took 72-year-old activist Dorothee Hildebrandt and her pink e-bike — which she fondly calls Miss Piggy, after the temperamental character from The Muppet Show — more than four months. She crisscrossed Europe and the Middle East until she arrived in Sharm el-Sheikh, at the southern tip of the Sinai Peninsula.

Her mission is to raise awareness and urge world leaders gathered at the annual U.N. climate conference known as COP27 to take concrete steps to stop climate change, she said. Greenhouse gas emissions continue to rise and scientists say the amount of heat-trapping gases needs to be almost halved by 2030, to meet temperature-limiting goals of the Paris climate accord of 2015.

Since her arrival a week ago, Hildebrandt and her e-bike have become a fixture at the summit. From a friend's place where she is staying, some 15 kilometers (9 miles) from the conference center, she bikes to the COP27 venue every day, meeting other activists and attending events. Many are keen to take photos with her around the conference venue.

“They really have to stop climate change,” Hildebrandt says of the world leaders. “Even if it is uncomfortable."

“It was uncomfortable for me ... this long ride," she told The Associated Press. But she wanted to show that if there's a will, “you can do it," she said.

Past climate talks have traditionally seen very large protests at the end of the first week of the two-week summit, often drawing thousands. This year has been mostly muted, with sporadic and small demonstrations during the first week. Activists have blamed the high cost of travel, accommodation and restrictions in the isolated Egyptian city for limiting the numbers of demonstrators.

The largest demonstration so far was on Saturday, a day after U.S. President Joe Biden made his stop at the summit. Hundreds of protesters chanted, sang, and danced in an area not far from where the negotiations were taking place amid tight security.

Born in the town of Kassel in central Germany, Hildebrandt says she got her first bicycle at the age of 10 and never stopped pedaling. In 1978 she moved to Sweden to marry her ex-husband.

She retired in 2015. Her activism and biking, which she documents on social media, is for the children and further generations of the world, she says. A sign on her bike reads, “Biking for Future and Peace.”

In her hometown of Katrineholm, 150 kilometers (93 miles) southwest of Stockholm, the Swedish capital, she founded “GrandmasForFuture - Katrineholm” in the town. The group focuses on raising awareness on climate change among other things.

Hildebrandt says she also wants Western industrialized nations to pay for the destruction they have caused so far — an issue called loss and damage, about reparations from big polluters to the global south that have been hurt the most.

Unhappy with results from the previous climate conference, COP26 in Glasgow, Scotland, she saw her chance in Sharm el-Sheikh.

Starting out on July 1, Hildebrandt cycled through 17 countries, covering 8,228 kilometers (5,112 miles), averaging about 80 kilometers (49 miles) a day. Her Facebook posts got thousands of views and she says she received positive feedback both from followers and people she met along the way.

In the Turkish coastal city of Antalya, her bike broke down. A cyclist, who works in tourism in the city, took Hildebrandt and her bike to a mechanic for repairs, and she was able to continue on.

And in Lebanon, she took taxies from the port city of Tripoli to Beirut for her safety. She then had a mandatory guide with a vehicle and a driver to travel to the Jordanian border through Syria.

"I could have used my bike throughout Syria, but the costs would have been too high for me,” she said.

Even in Sinai, local authorities barred her from cycling from the port of Nuweiba to Sharm el-Sheikh, apparently for her safety, she said.

Still, she is confident she has gotten her message across.

On Thursday, she was invited to cycle with Egyptian President Abdel-Fattah el-Sissi, an avid cyclist. She asked the president about the lack of large protests, compared to previous summits. She said el-Sissi said protests are not barred in Egypt.

“Everyone is allowed to demonstrate everywhere in Cairo and Sharm el-Sheikh" he told her, Hildebrandt says.

COP27 has turned a spotlight on a yearslong crackdown on dissent in Egypt, where most public protests are effectively banned by authorities.

After the summit ends Nov. 18, Hildebrandt will bike to Cairo, then on to the Mediterranean city of Alexandria before going to Israel’s port of Haifa and from there, on to Greece.