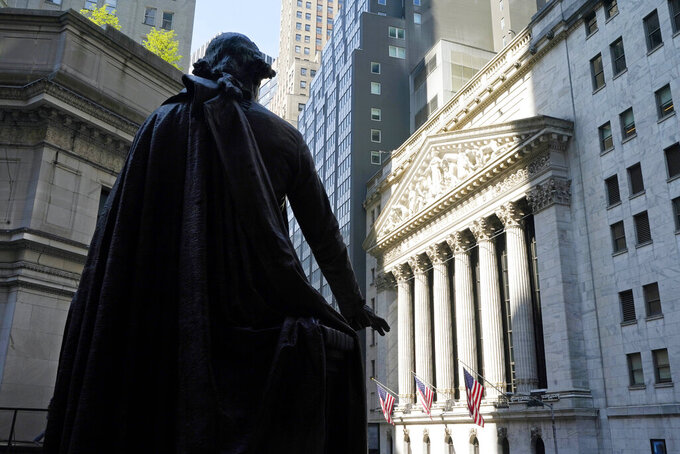 Richard Drew, ASSOCIATED PRESS
FILE - In this June 7, 2021 file photo, The Federal Hall statue of George Washington overlooks the New York Stock Exchange on June 7, 2021, in New York. Democrats have pulled off a quiet first in legislation passed this month: the creation of a tax targeting stock buybacks. The bill includes a new 1% excise tax on companies' purchases of their own shares, a tactic that companies have long used to return cash to investors and bolster their stock's price. (AP Photo/Richard Drew, File)

WASHINGTON (AP) — Democrats have pulled off a quiet first in their newly signed legislation addressing climate change and health care: the creation of a tax on stock buybacks, a cherished tool of Corporate America that had long seemed untouchable.

Under the bill President Joe Biden signed into law Tuesday, companies will face a new 1% excise tax on purchases of their own shares, effectively paying a penalty for a maneuver that they have long used to return cash to investors and bolster their stock price. The tax takes effect in 2023.

Buybacks have ballooned in recent years — they’re forecast to reach $1 trillion in 2022 — as companies have swelled with cash from sky-high profits.

Investors, including pension and retirement funds, like the buybacks. But fiery critics of big corporations and Wall Street like Sens. Elizabeth Warren and Bernie Sanders loathe them, calling the practice “paper manipulation” to enrich senior executives and big shareholders.

Democrats say that instead of returning cash to shareholders, big companies should use the money to increase employees’ wages or invest in the business. They are hoping the excise tax — it's projected to bring the government an additional $74 billion in revenue over 10 years — will cause a major shift in corporate behavior.

But some experts are skeptical that the tax will work as intended. They note that businesses have other methods for rewarding shareholders, raising the prospect that legislation aimed at halting one corporate stock practice could instead facilitate another, with new and unpredictable effects on the economy.

How it all plays out could be significant for the future landscape of big U.S. companies, their employees and their shareholders, and for the political staying power of one of the signature legislative initiatives of Biden and his Democratic majorities in Congress.

Where stock buybacks stand as the Democratic bill becomes law:

The major companies in the S&P 500 index bought a record amount of their own stock last year, $882 billion. Their buybacks reached $984 billion in the 12 months ended in March, another record.

Among the biggest repurchasers of stock are Big Tech companies such as Apple, Facebook parent Meta and Google parent Alphabet.

Companies have been plowing more of their cash into buying their own stock even as they’ve grappled with rising inflation, higher interest rates and the potential for stunted economic growth. They’ve faced higher expenses for raw materials, shipping and labor. Companies have largely been able to pass those costs on to their customers, but higher prices for food, clothing and everything else could threaten consumer spending — with resulting crimped sales growth for many companies. Americans are still spending, though more tepidly, the latest government reports show.

Buybacks can increase companies’ earnings per share because there are fewer shares universally held by shareholders. The buybacks can also signal confidence from executives about a company’s financial prospects.

WHAT HAPPENS AFTER THE TAX?

“I hate stock buybacks,” Schumer, D-N.Y., told reporters as the legislative package advanced through Congress. “I think they’re one of the most self-serving things that Corporate America does, instead of investing in workers and training and research and equipment.”

That makes for appealing election-year rhetoric, but whether the Democrats' aspiration will translate into different business behavior is less clear.

But will the goal be achieved? Rosenthal noted that in the wake of the 2017 Republican tax law, which gave companies a cash windfall by slashing the corporate tax rate from 35% to 21%, a wave of buybacks ensued. After the new excise tax goes into effect, companies might use some of the money they would have spent on buybacks to pay more dividends to shareholders instead, he suggested. The new tax puts buybacks closer to an equal tax footing with dividends.

Rosenthal doesn't rule out, though, that companies decide to put some of the saved money into raising workers' pay or investing in the business.

Counterpoint: The tax “is not going to translate into higher pay for workers,’’ said Jesse Fried, a professor at Harvard Law School who is an expert on corporate governance. And investing money back into the business may not be an option, he said, because “investment is already at very high levels, and there’s no indication that companies aren’t pursuing worthwhile projects because they lack the cash.”

In the end, Fried expects that most of the money not spent on buybacks would end up being added to the pile of some $8 trillion in cash that U.S. companies are sitting on.

Because the new excise tax will be calculated on the smaller, net amount of a company’s buybacks — total repurchases minus shares issued during the year — some companies may see it as modest hit worth taking and continue purchasing stock.

After surveying its analysts about the tax, RBC Capital Markets suggested that companies may grumble about it, but “it's unlikely to impact planning."

One thing is all but certain: With the new tax scheduled to take effect Jan. 1, companies have a deadline for buying back their stock tax-free. That means a flurry of buybacks could come in the months ahead.