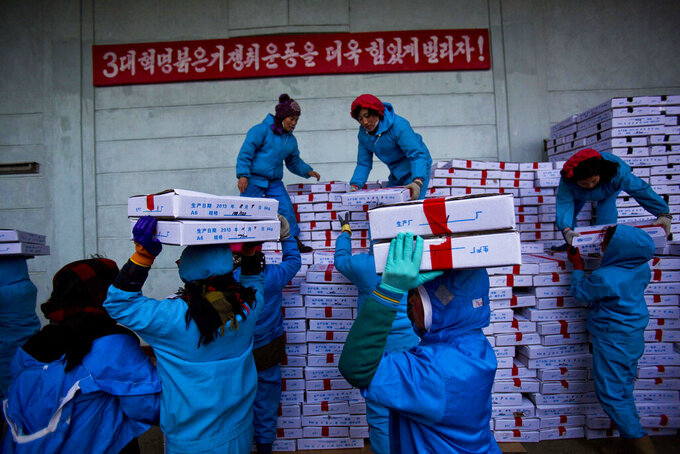 David Guttenfelder, ASSOCIATED PRESS
FILE - Workers carry boxes of seafood on Nov. 8, 2013, as they load a Chinese transport truck at the Suchae Bong Corp seafood factory in Rajin, North Korea, inside the Rason Special Economic Zone. China and Russia are urging the U.N. Security Council to end a host of sanctions against North Korea ranging from the export of seafood and textiles to the cap on imports of refined petroleum products and the ban on its citizens working overseas and sending home their earnings. (AP Photo/David Guttenfelder, File)

UNITED NATIONS (AP) — China and Russia are urging the U.N. Security Council to end a host of sanctions against North Korea including a ban on exports of seafood and textiles, a cap on imports of refined petroleum products and a prohibition on its citizens working overseas and sending home their earnings.

A draft resolution circulated to council members and obtained Tuesday by The Associated Press stresses the economic difficulties in North Korea and says these and other sanctions should be lifted “with the intent of enhancing the livelihood of the civilian population.”

The Security Council initially imposed sanctions on North Korea after its first nuclear test in 2006 and made them tougher in response to further nuclear tests and an increasingly sophisticated ballistic missile program. Former U.S. Ambassador to the United Nations Nikki Haley said in 2018 that the sanctions had cut off all North Korean exports and 90% of its trade and disbanded the pool of workers which North Korea sent abroad to earn hard currency.

The draft resolution expands on a similar resolution Russia and China circulated in December 2019. It faced opposition from Western nations when it was discussed and was never formally introduced at the council for a vote.

Several U.N. diplomats, speaking on condition of anonymity because the draft has not been made public, indicated it would likely face a similar uphill struggle, pointing to North Korea's continuing violations of U.N. sanctions.

The U.S. Mission to the United Nations said North Korea has failed to comply with sanctions on its nuclear and ballistic missile programs and the Biden administration “remains committed to the sanctions regime" and calls on all member states to enforce the measures.

On Oct. 19, North Korea fired a newly developed ballistic missile from a submarine in its fifth round of weapons tests in recent weeks, all of which violated U.N. sanctions. It was the North’s first underwater-launched test since October 2019 and the highest-profile test since President Joe Biden took office in January.

The China-Russia draft resolution makes no mention of the missile tests. Instead, it notes that North Korea has refrained from conducting nuclear tests since September 2017, has kept to a moratorium on further nuclear tests and test launches of intermediate-range and intercontinental missiles from April 21, 2018, and has taken additional denuclearization measures since.

The proposed resolution underscores “the necessity to respect the legitimate security concerns of the DPRK and ensure the welfare, inherent dignity and rights of people in the DPRK," using the initials of North Korea's official name, the Democratic People’s Republic of Korea. It reaffirms that U.N. resolutions “are not intended to have adverse humanitarian consequences” and notes “the serious impact of sanctions and the COVID-19 pandemic" within the country.

North Korean is struggling to deal with soaring prices of goods and shortages of medicine and other essential supplies that have accelerated the spread of water-borne diseases such as typhoid fever. The country has yet to report any cases of the coronavirus though experts have questioned its claim of a perfect record.

The China-Russia draft calls on all U.N. member nations to intensity their efforts to provide humanitarian assistance, “including but not limited to food, fertilizer and medical supplies,” and to provide goods, materials, technology and financial services needed by North Korea to combat COVID-19, improve livelihoods and develop the economy.

The draft resolution would lift a ban on North Korea importing some industrial machinery and transport vehicles used to build infrastructure that can’t be diverted to the country’s nuclear and ballistic missile programs.

The long list of construction and humanitarian items that would be exempt from sanctions includes bulldozers and firefighting vehicles; materials for railways and traffic control; air conditioners and radiators for heating; iron or steel parts for roofs and windows; screws and bolts; sewing needles and vacuum cleaners; kitchen utensils and equipment; agricultural equipment, bicycles and fire extinguishers.

The draft would end a ban on North Korean government representatives or groups engaging in “scientific and technical cooperation.” It would also allow a resumption of exports of giant statues produced in the North.

On the political front, the China-Russia draft welcomed “the positive outcomes” of talks between North and South Korea and between former U.S. President Donald Trump and North Korean leader Kim Jong Un. At Kim’s second summit with Trump in Hanoi in February 2019, negotiations faltered after the U.S. rejected North Korean demands for broad sanctions relief in exchange for a partial surrender of the North’s nuclear capabilities.

The proposed resolution calls on the U.S. and North Korea to resume dialogue aimed at building lasting peace on the Korean Peninsula. It calls on all parties to consider taking further steps to reduce military tension and the risks of military confrontation, including by adopting a declaration or peace treaty formally ending the 1950-53 Korean War. The war ended with an armistice, leaving the peninsula technically in a state of war.

South Korea, which has expressed a desire for engagement with North Korea within the boundaries of the U.N. sanctions, did not immediately react to China and Russia’s proposals for lifting sanctions on the North.

During a period of diplomacy in 2018, South Korean President Moon Jae-in met three times with North Korea's leader and vowed to resume inter-Korean economic cooperation when possible, expressing optimism that the sanctions would end and allow such projects.

But North Korea cut off cooperation with South Korea as its diplomacy with the Trump administration derailed in 2019.