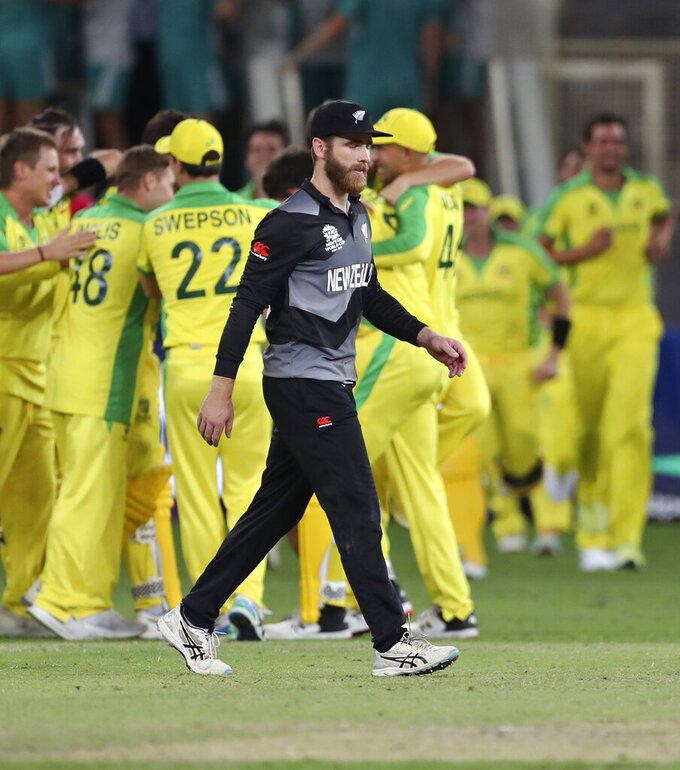 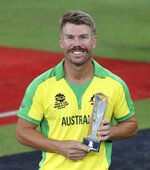 Skipper Kane Williamson, dropped on 21, led the way by scoring 85 off 48 balls, but his team was pegged back by Josh Hazlewood, who finished with impressive figures of 3-16 from four overs.

Marsh, who pulled fast bowler Adam Milne for a six over fine leg off the first ball he faced, smashed an unbeaten 77 off 50 balls and Warner made 53 off 38 as Australia reached 173-2 in 18.5 overs. The victory also ensured Australia kept intact its unbeaten record against the Black Caps in a knockout game since 1981.

“This is huge, to be the first Australia team to do it, so proud of how the guys went about the campaign," Australian captain Aaron Finch said. “Can’t believe people wrote him (Warner) off a couple of weeks ago, it was almost like poking the bear, (and Mitch Marsh), what a way to start, put pressure on from the start."

Marsh and Warner powered Australia’s solid run-chase with a 92-run second wicket stand, after coming together on 15-1, before Marsh and Glenn Maxwell (28 not out) featured in another solid half-century partnership to take Australia home.

Earlier, Hazlewood got the key wicket of in-form Daryl Mitchell (11) with a brilliant slower ball in an impressive three-over spell of powerplay as the Black Caps crawled to 57-1 by the halfway stage of their innings.

But Williamson, dropped by Hazlewood at fine leg, cut loose against fast bowler Mitchell Starc, who returned 0-60 — the most expensive figures in a T20 World Cup final.

Williamson smashed seven of his 10 boundaries against Starc besides hitting the left-arm fast bowler for one of his three sixes. Hazlewood returned in the 18th over and had both Glenn Phillips (18) and Williamson caught in the deep in the space of four balls.

Australia had successfully chased down a 177-run target against Pakistan in the semifinal match at Dubai, and a drier pitch made things easier for the likes of Marsh and Warner.

Both batters dictated the New Zealand seamers on a dry wicket despite Finch (5) holing out at deep mid-wicket off a short delivery from Trent Boult (2-18).

New Zealand's hopes of Ish Sodhi striking in the middle overs didn’t work out with both Marsh and Warner dominating the legspinner, who conceded 40 off his three overs.

Boult returned and clean bowled Warner, but had a night to forget when he couldn’t hold onto a return catch off his last ball of the spell with Australia needing just 15 for victory off 19 balls.

New Zealand’s 172 was the same total which it had successfully defended against Scotland in a group game at the same venue earlier this month. The other 12 games in the tournament at Dubai International Cricket Stadium were won by teams which batted second.

And Australia is not Scotland.

“They’re (Australia) a fantastic side, had a brilliant campaign and came out and turned it on," said Williamson, whose team had knocked out England with a five-wicket victory in the semifinals. “Credit to the way Australia chased it, they didn’t give us an inch. Wasn’t to be today, but proud of how we’ve operated ... there are only two possible outcomes, shame we couldn’t get the job done.”

The New Zealanders have still never won a title in one of the ICC’s white-ball World Cups.

In 2019, New Zealand and England met at Lord’s in the final of the 50-over World Cup. Neither team had ever won the trophy. The final finished in an unprecedented tie, and the outcome couldn’t be decided after a tiebreaker — a so-called Super Over. England was awarded the title on a boundary count.