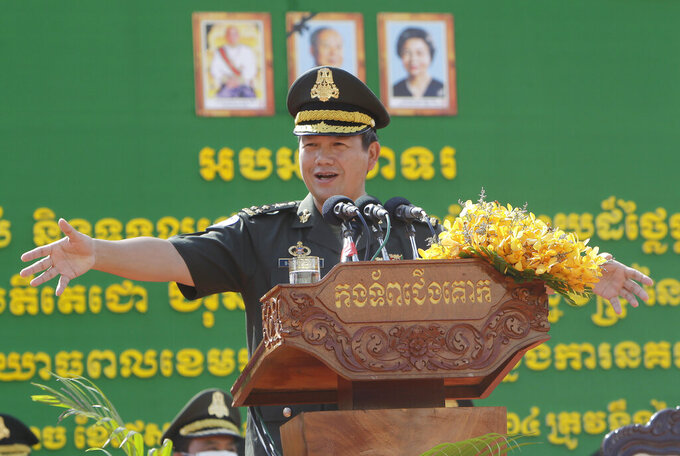 The 44-year-old Hun Manet, a West Point graduate, has the rank of lieutenant general and holds several important military posts. Besides being army chief, he is deputy commander-in-chief of the Royal Cambodian Armed Forces, a deputy commander of his father’s elite bodyguard unit and chief of the country’s counterterrorism force.

Hun Sen, who has held power for 36 years, has often mentioned Hun Manet as his potential successor after 2028, when he plans to step down. Two of his other sons had also been considered possible successors.

Speaking at the inauguration of roads and other infrastructure projects in the southern province of Preah Sihanouk, the 69-year-old Hun Sen declared that Hun Manet is best qualified to succeed him when he steps down.

“Today, I declare that I am supporting my son to be my successor, but he cannot do so except through election,” he said. “I have not been training him to be the leader of a gang of thieves. To be clear, Hun Manet is one among the candidates to become the next prime minister, and his father is fully supporting him."

Hun Sen noted that it would not be so unusual for Hun Manet to take over the job, pointing out that two modern-day former prime ministers of Japan, Shinzo Abe and Takeo Fukuda, came from families active in politics.

“Why would someone else’s son be able to become prime minister and the son of Hun Sen not be able to?” he said.

Urging his son to act for the good of the nation and its people, Hun Sen repeated that he should become prime minister only through election because Cambodia practices democratic pluralism.

Hun Sen’s opponents criticized him for acting in an autocratic manner and restricting the opposition.

In 2017, Cambodia’s only credible opposition group, the Cambodia National Rescue Party, was ordered dissolved by the country’s high court. The action was widely seen as a political move to ensure than Hun Sen’s Cambodian People’s Party faced no serious challenge in the 2018 general election. Hun Sen’s party ended up sweeping all the seats in the National Assembly.

It seemed increasingly likely to analysts in recent years that Hun Manet was being groomed to take over for his father. Hun Sen in his position as Cambodian People’s Party president issued a letter last year promoting the son from the position of vice chair of the party’s youth wing to become its chair.

Hun Manet in 2018 was boosted from the party’s 865-member Central Committee to its 37-member Standing Committee, the country’s key decision-making body, making him a de facto member of his father’s political inner circle.