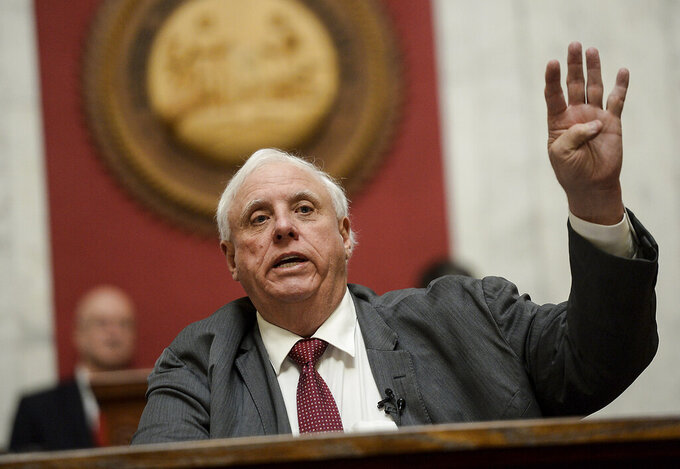 Chris Dorst, ASSOCIATED PRESS
FILE -West Virginia Gov. Jim Justice gives his State of the State speech in the House Chambers, Thursday, Jan. 27, 2022, at the West Virginia State Capitol in Charleston, W.Va. West Virginia Gov. Jim Justice vetoed a bill Wednesday, March 30, 2022 that would have split the massive Department of Health and Human Resources into separate agencies, saying he first wants a review of its “issues, bottlenecks, and inefficiencies.”(Chris Dorst/Charleston Gazette-Mail via AP)

CHARLESTON, W.Va. (AP) — West Virginia Gov. Jim Justice said Friday that the state is seeking bids on a consulting contract to undertake a thorough review of the massive Department of Health and Human Resources.

Justice said the deadline to submit bids is May 6.

In late March, Justice vetoed a bill that would have split the DHHR into separate agencies, saying he first wanted to look into its “issues, bottlenecks, and inefficiencies.”

Some supporters of the bill had said the move was long overdue for such a large agency and could have helped better address the state’s substance abuse crisis. West Virginia has the nation’s highest drug overdose death rate.

There also were failed attempts in the recent legislative session to address the state's foster care system, which falls under the DHHR. More than 6,500 children are in the care of the state. Pay raises for social workers were gutted after a bill aimed at improving foster care services unraveled on the Legislature's final day in March.

The DHHR currently has one cabinet secretary, Bill Crouch, overseeing a $7.6 billion budget, or 39% of the state’s entire spending. Eleven secretaries from other departments oversee the remaining 60% of state spending.

The DHHR split question goes back to a 2013 consulting firm report that suggested such a move would allow for a more efficient use of agency resources.

West Virginia has a $740 million budget surplus through the first nine months of the fiscal year, something the two-term Republican governor has in mind as he goes forward with even more consulting work on the DHHR for what he called a top-to-bottom review.

“Every breathing, living person knows that DHHR did not just get this way on my watch or in the last few years," Justice said at a news conference. "Really and truly, DHHR has had problems for a long, long, long time. The great thing is we’re addressing them now.

"We finally got the dollars coming in from a surplus standpoint to be able to do something. All we’ve been able to do in the past was cut, cut and cut more and you couldn’t do anything. Now there may be a real possibility to really even help more.”