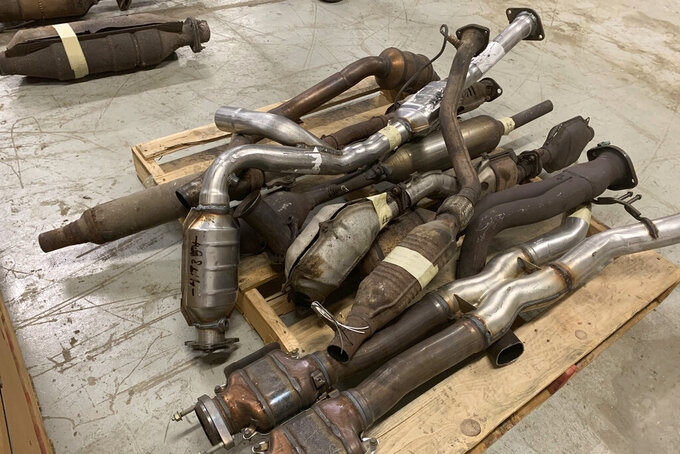 OGDEN, Utah (AP) — Utah lawmakers are considering a crackdown on catalytic converter theft, in which criminals saw the emission control devices from cars and sell the precious metals found inside to a booming worldwide black market.

“We want to force the (illegal) sales out of the legitimate areas, to lock down the legitimate ways to dispose of them,” Wilcox said. The usual proper channel is through metal recycling yards.

“The individuals stealing them are usually drug addicts,” Candace Daly, a Utah recycling industry representative, said during a hearing on the bill Wednesday afternoon at the Utah Capitol in Salt Lake City before the Law Enforcement and Criminal Justice Interim Committee.

Daly said the going rate per ounce for rhodium this week was $9,950. Palladium is worth $1,967 per ounce, and platinum is $928, she said, listing three metals commonly found in catalytic converters.

Thieves may try to sell stolen converters to recyclers and sometimes are successful because tracking and enforcement is lacking, hence the need for a database, said Chris Walden, a Utah Attorney General’s Office supervisory special agent.

The AG’s office in April and May conducted Operation Urban Mining, making undercover sales and buys of converters. They served a search warrant on a storage unit in Davis County and found 124 stolen converters and five bags of loose material from inside converters. Agents arrested three people.

Wilcox said in an interview that the investigation uncovered a converter theft ring operated from Eastern Europe and the materials were shipped to Malaysia. “They were sort of using folks who are criminals already here and paying them” for converters, he said.

One of the worst aspects of the trend is that converter thefts are often targeted at vehicles parked on streets, driveways or apartment parking lots. “It’s just a real tragedy, the amount of money it costs each family that this happens to,” Wilcox said. “In my neighborhood, most people don’t have garages.”

The Ogden Police Department and the Weber County Sheriff’s Office did not immediately respond to inquiries about converter thefts locally.

In addition to setting up a database, Wilcox’s bill would limit sales of converters to scrap dealers, auto recyclers and owners of vehicles.

It also would create a presumption that a converter is stolen if information is not collected at the time of purchase or the same person tries to sell more than one converter a week.

Daly said she worked with Ogden Sen. Jon Greiner, who was also the police chief, on a metal thefts crackdown bill in 2007. That measure set up a system through which police departments would email suspect information to recyclers, who would then be on the lookout and report back to police as needed.

But through employee turnover and other causes, she said, “The system has fallen apart and it’s not really working like it was.”

She urged lawmakers to make a “team effort” and not impose the new program’s burdens just on recyclers. Enforcement emphasis against property crime has fallen since 2007, she said.

“The thieves are not getting arrested and put in jail, there are not enough drug treatment facilities, and law enforcement needs more officers,” she said. “They are underpaid and overworked and it’s not a super high priority to stop this.”

Sen. Karen Mayne, a Democrat from Salt Lake County who will sponsor the bill in the Senate, said anyone who parks a car publicly is at risk. “My next-door neighbor’s two daughters went to a concert and when they walked back out, the cars didn’t have those ‘cats,’” Mayne said.

To try to avoid converter theft, vehicle owners can install anti-theft devices and park in locked garages or well-lit areas, according to the research firm BeenVerified. In public lots or garages, owners should park near entrances or where foot traffic is high.