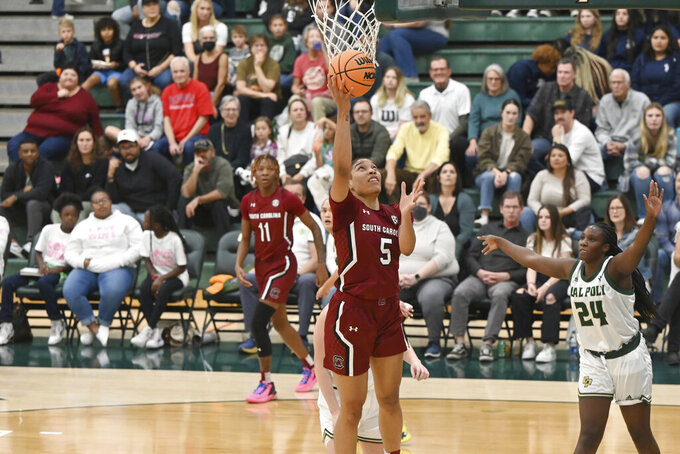 SAN LUIS OBISPO, Calif. (AP) — Even in the early stages of the season, South Carolina coach Dawn Staley has her team focused on tournament basketball in March and April.

The Gamecocks closed a cross-country, four-game road trip with a 79-36 victory over Cal Poly Tuesday night that gave her squad a test of what it is going to be like late in the season, where they will have to quickly bounce back.

The game at Cal Poly came two days after the Gamecocks had a hard-fought 76-71 overtime victory at second-ranked Stanford. The road trip opened on Nov. 11 with a victory over No. 17 Maryland and a win six days later against Clemson.

“This was a tough stretch for us, and you probably saw a little bit of in the first half of us. We looked sluggish and like we were in quicksand” Staley said. "A lot of that is probably just mental and physical fatigue. But we got to strengthen the mental part of it. If you want to win a national championship, you got to win on a Friday and Sunday.

“We’re just making it known to our players that when fatigue sets in, something else has to kick in. We've got to build some more habits to be able to perform a lot quicker than we did today.”

Aliyah Boston, the reigning AP Player of the Year, had 12 points and 10 rebounds for her 64th career double-double, which is the most among active NCAA players in all divisions. It is also her fourth-double of the season.

The Gamecocks (5-0) led throughout. Laeticia Amihere was the leading scorer off the bench with 13 points, Zia Cooke added 11 and Ashlyn Watkins had 10 points and 11 rebounds.

Annika Shah led Cal Poly (2-3) with eight points, all in the fourth quarter. The Mustangs were 8 of 55 from the field before making four of their last five.

“Their adjustment at halftime was to pressure. Our guards aren’t used to that type of pressure and it is tough to practice that,” Cal Poly coach Shanele Stires said. “They turned it up and credit to them for making the adjustment. It was tough because the momentum we finished with during the second was inspiring.”

South Carolina, which was 39 of 63 from the field, scored the first 14 points and made six of its first nine shots before Natalia Ackerman's layup with 31 seconds remaining got Cal Poly on the scoreboard.

The Mustangs played well in the second quarter and closed the first half with a 7-2 run to trail 33-17 at halftime. But the Gamecocks began the third quarter with a 15-4 run that included five points from Cooke and four by Boston.

South Carolina had an 8-minute stretch in the third and fourth quarters where it scored 24 straight points.

South Carolina: The Gamecocks shot well from the floor, but were only 4 of 12 on free throws.

Cal Poly: The Mustangs have had a tough non-conference stretch to start the season. Besides hosting the nation's top-ranked team, they have had road games against Stanford and UCLA.