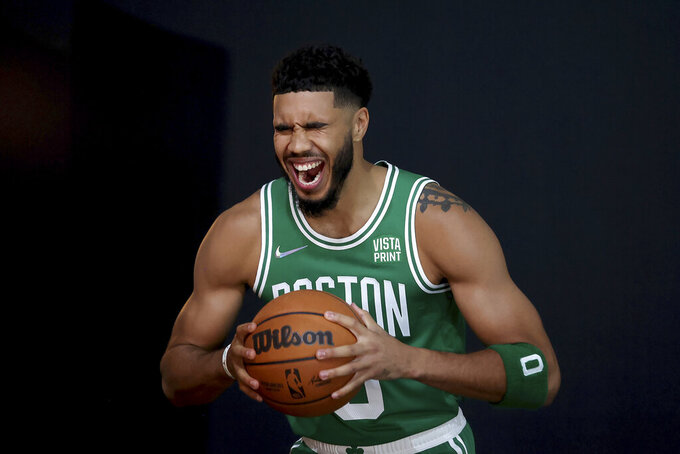 As an assistant on the U.S. men’s national team in 2018, and again for the 76ers and Nets teams that met the Celtics in the playoffs in consecutive seasons, Udoka got a firsthand glimpse of two players who showed the eagerness and skillsets to impact the game on both ends of the floor.

Now, as he prepares for his first season in Boston, he’s making it his task to get even more out of the young stars he calls the “pillars” for the Celtics as they try to get on the path to chasing their 18th championship.

“You see their strengths,” Udoka said. “As a coach you’re always looking at what these guys do great and areas they can grow and improve in.”

Tatum and Brown have expressed a desire to be pushed by Udoka. Tatum said he feels like Udoka can help him continue to grow heading into his fifth NBA season and coming off back-to-back All-Star selections.

“I think I feel more and more comfortable, each and every season, of being one of the leaders, one of the focal points of the team,” he said.

While that will require adjustments, Udoka said he won’t be trying to reinvent the wheel for Tatum or Brown.

“We want to not take away strengths, because we do have some tremendous scorers," Udoka said. “We want to help them become better playmakers and know that guys are relying on them to get shots.”

Udoka inherits a team that has gone from making the Eastern Conference finals in three of the previous four seasons to plummeting to the No. 7 seed this past season and losing in the first round to Brooklyn.

Stevens was tasked not only with hiring his own successor but also creating some salary cap space to put the team in better shape for the future.

He did that, trading point guard Kemba Walker and the more than $70 million he had remaining on his contract to the Thunder and getting back former big man and five-time All-Star Al Horford in the deal.

He also gave veteran guard Marcus Smart a four-year, $77 million extension, brought in free agent point guard Dennis Schröder on a favorable one-year deal and added some depth and help on the defensive end by picking up Josh Richardson and Enes Kanter.

None of the moves will make Boston an instant contender to win the East, but it will be enough to get Udoka started in putting his imprint on a team he wants to share the ball more and play with tempo.

Horford’s return gives the Celtics a dependable front-court presence that they’ve lacked since he departed in free agency two seasons ago. The 6-foot-9 forward is 35 years old now but isn’t far removed from being a member of the NBA All-Defensive team with the Celtics in 2017-18 while also posting the best assist numbers of his career.

He also figures to be a little more rested this season after logging only 782 minutes in 28 games before the Thunder shut him down to give more minutes to their younger players.

“The difference between 30 and 35 — the season will tell, and time will tell," Horford said. "But I feel really good now. I feel more prepared.”

Williams played one year with Horford before he left Boston, but now he’ll be in position to learn even more from him.

One of the biggest impediments to his growth thus far has been Williams’ ability to stay on the floor, dealing with leg, hip and foot injuries that limited him in his first three seasons. He also spent a considerable amount of time out last season following a rough bout with COVID-19.

Still, he appeared in a career-high 52 games last season and led the team with 1.8 blocks per game. He also was third with 6.9 rebounds per contest. It’s a lot to build on, Udoka said.

Udoka said he’s looking for point guard Payton Pritchard to learn more about the position in his second season so that, as Udoka said, he’s “not just looking to score every time.”

Romeo Langford logged some extra playing time in the preseason with Brown on the COVID-19 list and is someone who has a chance of cracking the rotation.

It’s also a big season for third-year forward Grant Williams, who will have a better chance to earn minutes following the departure of Tristan Thompson.