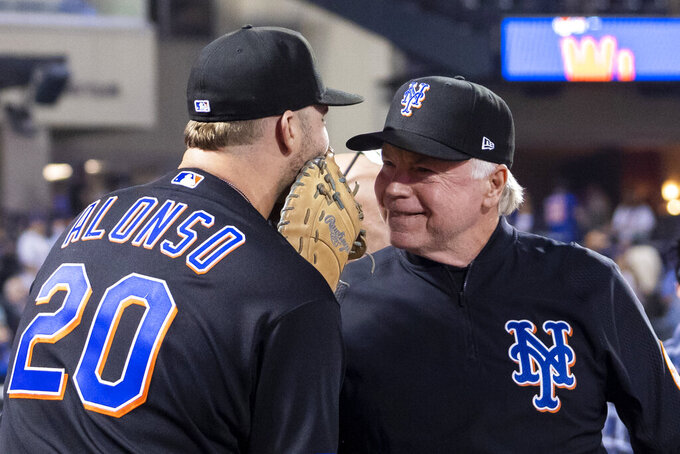 Jeff McNeil, making a rare appearance in right field, saved at least one run with a spectacular catch against the wall that robbed Oneil Cruz.

“He kept going back,” Walker said. “Helped me out.”

Cruz hit a two-run homer for last-place Pittsburgh (55-90), which has lost 90 or more games in each of the last four fully completed seasons.

Edwin Díaz allowed only a walk in 1 2/3 innings for his 30th save in 33 chances. He reached 30 saves for the second straight season and fourth time in his big league career.

New York went ahead in the third when Eduardo Escobar walked with one out and, running on the pitch, scored from first on Tomás Nido's opposite-field single to right. Nido ran through a stop sign from third base coach Joey Cora and slid headfirst across the plate as Ben Gamel's throw went about 15 feet up the third-base line.

“You tell runners all the time in spring, ‘Run and make them stop you,’” Mets manager Buck Showalter said. “You see a lot of guys take those baby steps or you can tell they don't want to go. Our guys don't do that. They want to go.”

Vogelbach, acquired from the Pirates on July 22, drove a 94 mph sinker to left-center in the fourth. The burly designated hitter has 17 homers this season, including five with the Mets. He had not gone deep since Aug. 22.

“Being on a team like this with so many good players and so many good people, you don't have to be that guy all the time,” Vogelbach said. “It's pretty special.”

Michael Chavis had a run-scoring infield single in the fifth, when McNeil made a leaping catch near the top of the right-field wall of a Cruz drive for the final out with two on. McNeil made just his fifth start in right field this season.

Alonso put New York ahead 3-1 with a sacrifice fly in the sixth, when Luis Guillorme stranded the bases loaded with a popout.

Brando Nimmo added an RBI single in the seventh against Manny Bañuelos.

Cruz homered in the eighth on Walker's 100th and final pitch, a 429-foot drive to dead center. Cruz has 16 homers, tied with teammate Jack Suwinski for second-most amongst National League rookies behind Atlanta's Michael Harris.

Tampa Bay claimed OF Bligh Madris off of waivers from the Pirates. Madris hit .177 with one home run and seven RBIs. “It’s unfortunate for us,” Pirates manager Derek Shelton said. “It’s fortunate for Bligh. This is a kid who put himself on the map and sometimes when you have to take guys off, organizations decide to make decisions.”