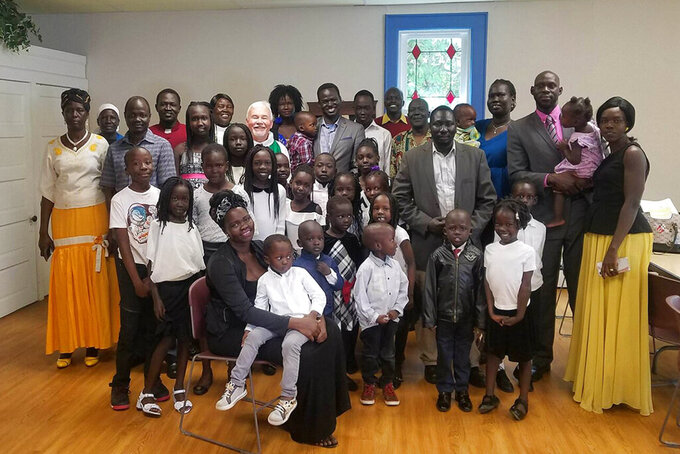 Uncredited, ASSOCIATED PRESS
This undated photo provided by Garang Achiek in October 2021 shows members of the Diangdit Episcopal Chapel congregation with the Rev. John Crosswaite, center left, former canon to the Ordinary of the Episcopal Diocese of Central New York, in East Syracuse, N.Y. The congregation is made up of refugees from South Sudan who pray in their native language, Dinka. (Garang Achiek via AP)

(RNS) — On the corner of East Avenue and West Yates Street in East Syracuse, New York, sits Emmanuel Episcopal Church. The quaint building, with its bright white exterior and cherry red doors, is the home to not one, but two distinct congregations. The first, a modest parish of 25 Americans, meets early on Sunday morning, and the other, a group of South Sudanese refugees, in the midafternoon.

Diangdit Episcopal Chapel has been worshipping out of Emmanuel Church for three years. The congregation is made up of refugees from South Sudan who pray in their native language, Dinka. Their success has been fostered by the Episcopal Diocese of Central New York and a local interfaith resettlement agency that found them a place to hold services and supported their integration into the community.

Many of the congregants of Diangdit Chapel have been in East Syracuse for more than two decades. The first to arrive in the area were part of the Lost Boys of Sudan, a group of over 20,000 Sudanese and South Sudanese boys who were forced to seek refuge on foot in neighboring countries due to conflict and violence. In 2001, many of these boys were offered resettlement in the United States through a program created by the United Nations High Commissioner for Refugees.

Shortly after arriving in the United States, the few men who were relocated to the Syracuse area began meeting at University United Methodist Church, said Garang Achiek, senior warden of Diangdit Chapel. On Sunday afternoons, they would sing worship songs and pray in Dinka after the 10:30 a.m. English service at the church was finished.

“They didn’t have any family here,” said Abiei Gai, Diangdit Chapel secretary. “So, they decided to get together and come up with a church.”

After a year, the group moved to St. Paul’s, an Episcopal church in downtown Syracuse, where group members could worship in a church of their own denomination, said Achiek.

While they were at St. Paul’s, American pastors joined them on Sundays to preach and lead services, said Gai. But in 2014, one of their lay readers, the Rev. Mother Amuor Garang, traveled home to be ordained in the Episcopal Church of South Sudan. When she arrived back in the United States, she began leading services in Dinka.

The refugee congregation, which at the time was known as Malek Chapel, spent more than a decade at St. Paul’s. Many of the first men to arrive in the United States got married and started families there, said Gai. The congregation grew to more than 50 members and they began a Sunday school for the children and a Dinka school, to teach new generations their native language.

In 2018, a conflict arose between the two parishes surrounding the use of space, which left the congregation looking for a new home. Members contacted the Episcopal Dioceses of Central New York, which began the process of finding them a new space as well as setting up a program for their integration with a new parish in the area.

When finding a new home for this congregation, Bishop DeDe Duncan-Probe was intentional about finding a church that would understand the mutual agreement over the use of space, which led her to Emmanuel Episcopal Church in the fall of 2018.

“When they moved to Emmanuel, I wanted to set them up with the best chance for success,” said Duncan-Probe.

With the help of InterFaith Works, a faith-based resettlement agency based in Syracuse, Duncan-Probe started a program called Building United Communities, funded by a United Thank Offering Grant, designed to facilitate dialogue between predominantly white churches and refugee congregations that share their space.

This program has helped “identify common areas of conflict and ways to be more intentional about building community through differences,” said Duncan-Probe.

When Diangdit first started worshipping out of Emmanuel there was some skepticism throughout the congregation that it would be welcomed by the mostly white parish. But, through potlucks and gatherings organized by Building United Communities, the two congregations got to know each other and began to foster a relationship.

“We would cook Dinka food, they would cook American food, and we would just get together and talk,” said Gai.

“We’ve been very happy to have such a lively and vibrant congregation using our space,” said the Rev. Gerard Beritela, the priest at Emmanuel Church. As a welcoming act early in the relationship, Beritela said members of Emmanuel decided to change the sign outside of the church to include the services held in Dinka.

As the group was settling into its new home at Emmanuel, members were also beginning the canonical transition into the Episcopal Church of the United States. Among the many steps in this process, said Gai, was choosing a name for their church. After much discussion, they settled on Trinity, an ode to Trinity United Church of Christ of the American civil rights movement, and which in Dinka translates to Diangdit.

It took a year, but at the 151st Diocesan Convention in late 2019, Diangdit was officially recognized as a mission chapel of the Diocese of Central New York. Its status as a mission chapel means it receives support from the diocese as it continues to grow, but with the hope that one day Diangdit will be able to sustain itself, said Duncan-Probe.

“The story of Diangdit is a story of finding your way home,” the bishop said. “We’re much stronger and much more capable as a community because they are part of us.”

The future of Diangdit is in the hands of the youth, said Achiek. The congregation is young ­— most families in the parish have five or six children. Leaders hope to set up a day care program and a tutoring program for struggling students, and to expand the Dinka school.

While Sunday services do not get as many worshippers post-COVID-19 as they did before — they now average 30 people — members still hope their children will learn and carry on the Dinka language.

“It has always been about preserving our language through prayer,” said Achiek.