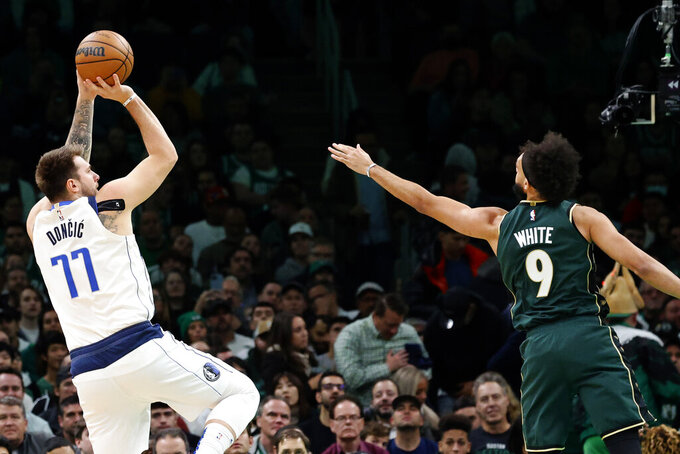 BOSTON (AP) — With Dallas closing the gap, Jayson Tatum turned the matchup with Luka Doncic into a game of one-on-one.

And the Boston star bested the Mavericks' each time.

Tatum had 37 points and 13 rebounds and Jaylen Brown scored 31 on Wednesday night to help the NBA-best Celtics respond after a rare loss and beat Dallas 125-112.

“His ability to answer the moment. His ability to make everyone around him better,” Celtics coach Joe Mazzulla said. “You can count on him to play every night.”

Doncic, the NBA's leading scorer, had 42 points for the Mavericks. Tatum, the No. 4 scorer in the league, had been listed as questionable with a sprained ankle.

Tatum drove for a two-handed, rim-hanging slam, then Doncic was called for an offensive foul. Doncic fouled Tatum, who hit two free throws to give Boston a 121-107 lead, then Tatum blocked Doncic’s layup attempt.

The Celtics, who have a league-leading 14 wins, had won nine straight before losing to the Bulls on Monday.

“Chicago was just one game,” Brown said. “There’s going to be times where you’re going to not make shots and it’s going to put pressure on our defense. More times than not, this team’s going to play the right way.”

The Mavericks had beaten Boston four straight times. Three of the wins came on a 3-pointer in the final seconds, and two of those were with no time at all on the clock.

“Dallas has gotten the best of us the last few years,” Tatum said, admitting that Brown was “probably right” about the chances of him sitting out. “I'm always going to try to lace them up. Sitting out is never really an option.”

But Doncic wasn't able to keep this one close.

Spencer Dinwiddie, who was listed is questionable with a dislocated shoulder, had 15 points for Dallas.

Boston led 17-14 six minutes into the game before scoring nine straight points — seven of them by Brown. Tatum scored 16 points with five rebounds in the second quarter alone, when the Celtics led by 13 points, 55-42, before scoring 13 of the next 14 points to open a 25-point lead.

Mindy Kaling and B.J. Novak, from NBC’s “The Office,” were sitting courtside.

Mavericks: At Toronto on Saturday.