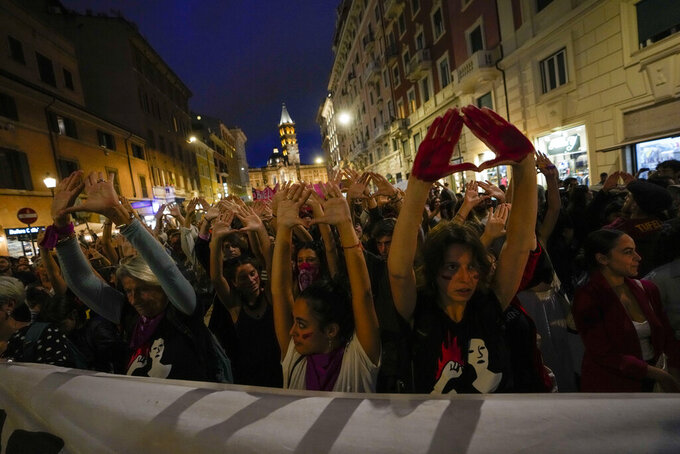 Alessandra Tarantino, ASSOCIATED PRESS
People stage a protest on 'International Safe Abortion Day' to ask for more guarantees on the enforcement of the abortion law that they claim is seriously endangered by the high rate of doctors' conscientious objection in the country, in Rome, Wednesday, Sept. 28, 2022. (AP Photo/Alessandra Tarantino)

ROME (AP) — Italians marched through Rome, Milan and other cities Wednesday to protect access to abortion, which many fear will be under threat by a far-right party expected to form the next government after leading in parliamentary elections.

Waving banners reading “My body — My choice” and “Safe for All,” more than 1,000 people marched from Rome’s Esquilino neighborhood, and at least that many from Milan’s Central Station.

The marches were part of nationwide actions aimed at sending a message to Giorgia Meloni and her Brothers of Italy Party that protesters won’t stand for any changes to 1978 legislation, known as Law 194, guaranteeing access to abortion. The protests coincided with International Safe Abortion Day.

Many cited curbs on abortion in many U.S. states after the U.S. Supreme Court struck down landmark legislation that had guaranteed access to abortion for decades as an indication of trends internationally.

Meloni “continues to say that she doesn’t want to touch Law 194, but that she wants to guarantee a woman’s right not to abort,″ said protester Donatella Marcelli. ”I don’t believe what she says about choice.”

Organizers said they feared Meloni’s party will launch “a triad of ‘God, homeland and family’” policies — a reference to her political manifesto.

That could impose “rigid gender roles and assign women the task of reproduction and growth of a white, patriarchal and heterosexual nation,” organizers said in their announcement of the rallies against the agenda of Meloni, who would become Italy’s first far-right premier of the post-war period and its first woman in that office.

The elections also swept away veterans of successful battles for civil rights, including divorce and abortion, as well as lawmakers still struggling for freedoms like same-sex marriage.

Perhaps Italy's most celebrated living civil rights activist, Emma Bonino, lost her Senate seat to a Rome city councilwoman from Brothers of Italy, the party co-founded a decade ago by Meloni, who exalts motherhood and “traditional” families and decries LGBTQ “lobbies.” Lavinia Munnino's no. 1 campaign priority was boosting Italy's birthrate.

Bonino told the AP by phone she was too busy on Tuesday preparing an appeal for a recount in the close race to discuss worries about civil rights. While campaigning, Bonino voiced concerns that Meloni would make access to abortion difficult.

Italy allows abortion on request in the first 12 weeks of pregnancy, or later if a woman's health or life is endangered.

As a young woman, Bonino, now 74, spearheaded successful drives in the 1970s to legalize both abortion and divorce, that were both aggressively opposed by the Vatican, which wields political influence in Italy.

Before the Sept. 25 election for Parliament, Meloni said she would respect the 1978 law, but would push for measures, such as economic help, for women who decide to give birth instead of aborting.

The law allows for health personnel to register as conscientious objectors so they won't have to perform abortions. In some regions, including one where Meloni's party governs, the percentage of objectors is so high that women are forced to travel to other parts of Italy to obtain an abortion, Bonino has noted.

Among others defeated by right-wing candidates was Monica Cirinna, a Democratic Party lawmaker behind the passage of a 2016 law legalizing same-sex unions. Italy had been the last holdout in Western Europe on that recognition, but Cirinna was thwarted in efforts to permit adoption by same-sex couples.

Alessia Crocini, who heads the Rainbow Families group advocating rights for LBGTQ families, called Meloni’s victory “terrible news.” Rights activists had expected it, "but when something like this materializes it becomes real, it is pretty shocking," she said.

“I have been an activist for a very long time and there are people who I do not know who are writing to me on Instagram, ‘I am afraid,’ 'I don’t know what to do,’ 'I am very worried, I want to cry.'"

Crocini claimed that Meloni’s objective is “to break the LGBTQ movement.”

Also defeated was Democratic Party Senator Emanuele Fiano. The son of a survivor from the Auschwitz death camp during World War II, Fiano has battled against the rise of neo-fascist political movements. A recipient of antisemitic threats, Fiano has a police escort.

Besting him in a Senate district race in a Milan suburb was Isabella Rauti, a Brothers of Italy senator whose late father, Pino Rauti, helped found the Italian Social Movement, a party nostalgic for fascism formed just after the end of the war.

Meloni ignored a demand by Holocaust survivor Liliana Segre, who is a senator-for-life, to remove from her party's symbol the flame in the three colors of the Italian flag that belonged to the Italian Social Movement. While decrying anti-Jewish laws of Benito Mussolini’s fascist regime, Meloni has defended her party’s symbol.