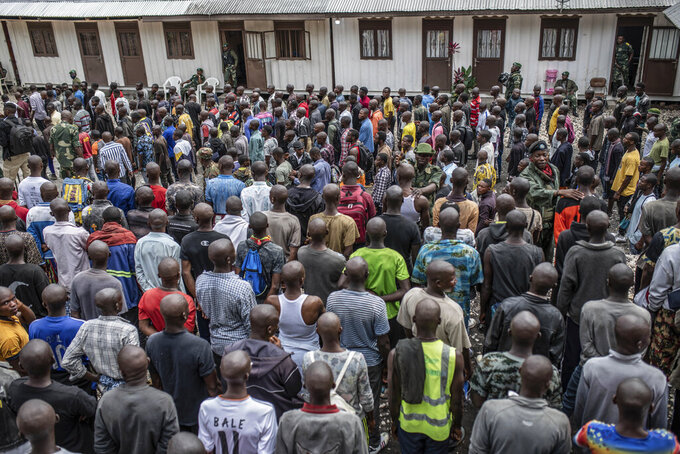 Moses Sawasawa, ASSOCIATED PRESS
Democratic Republic of the Congo youth get the first steps of basic military training in Goma, eastern Congo, Monday Nov. 7, 2022. While the M23 rebels continue to gain ground, more than three thousand young volunteers have just enlisted to fight the rebels and try to stop their advance. This mobilization of young people comes after the Congolese head of state called for a general mobilization. (AP Photo/Moses Sawasawa)

GOMA, Congo (AP) — Congolese fighter jets began bombing rebel targets Tuesday in the country's embattled east, escalating its fight against the M23 group that the government alleges has been advancing with help from neighboring Rwanda.

Jean Claude Bambaze, president of Rutshuru's civil society, told The Associated Press that aerial bombardments were reported in the villages of Chanzu and Musungati, about 35 kilometers (22 miles) from Rutshuru.

“We are seeing the comings and goings of Congolese warplanes," he said. “We call on the Congolese government to finish quickly with this M23 affair, because people have already fled their homes and others are confined in camps without humanitarian assistance.”

There was no immediate confirmation or comment from the Congolese military on the reported aerial bombardments. However, M23 spokesman Lawrence Kanyuka accused the army of attacking heavily populated areas and “trampling on the call for dialogue."

“This warmongering option is counterproductive and puts the lives of many citizens in the areas under our control in extreme danger and exacerbates the humanitarian situation in the region,” Kanyuka said in a statement.

Neighboring Rwanda has long denied providing support to the M23, which re-emerged a year ago after being mostly dormant for a decade. The rebel group has rapidly advanced in recent weeks, doubling the amount of territory it controls.

In a show of force, Congo's military began training some 3,000 new recruits on Monday in Goma.