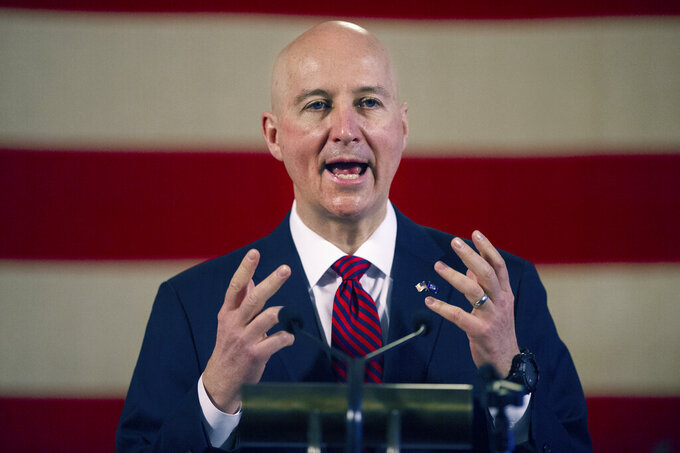 Kenneth Ferriera, ASSOCIATED PRESS
FILE - In this Feb. 26, 2021, file photo, Nebraska Gov. Pete Ricketts speaks during a news conference at the Nebraska State Capitol in Lincoln, Neb. Gov. Ricketts is resurrecting a version of Nebraska's daily virus reporting dashboard website because the number of COVID-19 hospitalizations has continued to rise through the summer. (Kenneth Ferriera/Lincoln Journal Star via AP File)

Ricketts unveiled a 104-second ad that will be chopped into segments and aired in major media markets within 500 miles of Nebraska, including Minneapolis, Kansas City, Denver and Chicago, as well as in Austin, Texas and Silicon Valley.

The ad features numerous clips of people working in high-tech jobs, enjoying the outdoors, and buying $225,000 houses. Actor Adam Devine, an Omaha native, riffs on the the state's slogan, “Nebraska, the good life,” by talking about all the “good” things the state offers.

Ricketts defended the use of federal pandemic relief money to pay for the spot, arguing that the funding was intended to help state economies and noting that other states have used their share for similar ad campaigns. South Dakota announced last year that it was spending $5 million in federal money on a tourism ad campaign, featuring Republican Gov. Kristi Noem and drawing criticism that she was using the 30-second spot to raise her political profile.

Ricketts does not appear in the Nebraska ad.

“Nebraska is one big small town and we just have a tremendous quality of life that goes along with that, and we want people to know about that,” he said at a news conference.

Nebraska has been struggling for years to attract skilled workers to fill jobs in health care, manufacturing and other major industries. The state now has a 2.2% unemployment rate, the lowest both nationally and in state history, and has more job openings than people who are on unemployment. In recent weeks, Ricketts has highlighted some of the state's efforts to help more people get jobs.

Anthony Goins, the director of Nebraska's Department of Economic Development, said the ad seeks to highlight all of the available jobs and amenities in the state. He said the $225,000 home prices were shown to appeal to residents of larger cities where housing is much more expensive.

“Frankly, this story has been under-told and undersold,” he said. “We've had a great deal of humility and we haven't shared, but I think we can do both.”

Clint Runge, founder and CEO of founder of Archrival, a marketing firm that handled the project, said the ad was shot in more than 60 locations and featured 170 Nebraska residents.