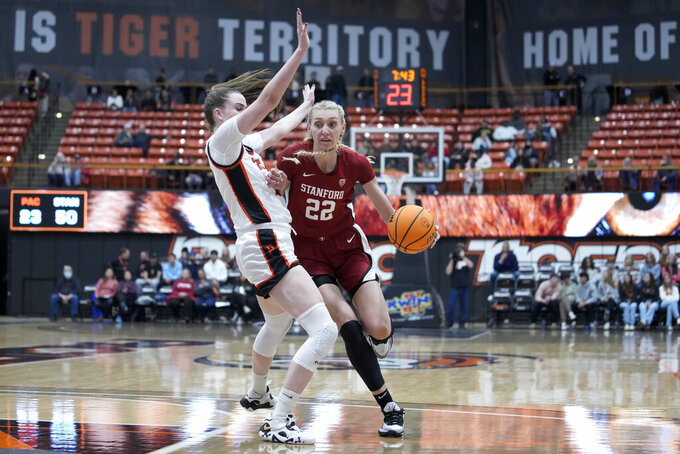 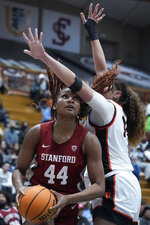 STOCKTON, Calif. (AP) — Kiki Iriafen had 15 points and eight rebounds, leading No. 2 Stanford to a 98-44 victory over Pacific on Friday.

Iriafen was one of three players who scored in double figures for Stanford, including Hannah Jump (14 points) and Ashten Prechtel (11).

Iriafen scored twice inside during a 14-0 run midway through the second quarter that allowed Stanford (3-0) to pull away, and the Cardinal added to their lead steadily the remainder of the game as coach Tara VanDerveer went to her bench early and often. Iriafen, a 6-foot-3 sophomore, made all seven of her shots from the field.

“It was a very slow start, but we’ve got a lot of people who want to play and we just go to the bench,” VanDerveer said. “Kiki played really well, and different people came in and helped us and we got out in transition well.”

Pacific hung tough early, twice building an early lead and tying the game for the third time at 10-10 on Cecilia Holmberg’s jumper midway through the first period.

But Stanford clamped down on defense and pulled away with its bench doing as much damage as the Cardinal starters during a 28-8 second-quarter blitz.

“This particular team is a deep team and we can really tire people out by playing with a lot of pace,” said VanDerveer, whose team has won its first three games by an average of 52 points. “We do have some scorers and good shooters and we just need people to take good shots and keep moving the ball.”

The Cardinal shot 63.3% from the field, 47.4% from 3-point range and missed only one of their eight free throws. Jump made all four of her 3-point attempts and Prechtel was 3 of 4 from long range.

Pacific (1-1) put up more shots than Stanford in both the first and second quarters, but was limited to just 25% shooting from the field at halftime and just 23.6% overall. The Tigers were led by Liz Smith’s 13 points and six rebounds.

“They’re so long at every position, and that really affected a lot of our shots,” Pacific coach Bradley Davis said. “Their length got to us, and in the second half our fatigue started to show. They wear you down and they’ve got some great shooters on the outside. I think (Jump) is the best shooter in the country. You can’t give her any open space because she’s not going to miss too many.”

Stanford: Despite a slow start, the Cardinal shot over 50% from the field for the third consecutive game to begin the season. Stanford shot 75% from the field in the second quarter, and 76.5% in the third period. ... Stanford entered the game with six players scoring in double figures and that balance again was on display as the Cardinal had eight players score seven points or more.

Pacific: The Cardinal were a tough early test for the Tigers, who routed former Big West foe UC-Riverside 83-61 in their season opener. ... Pacific continues to get a boost from the outside shooting of Smith, who was 3 of 6 from 3-point range. Pacific made just five of 25 3-point attempts.

Stanford: The Cardinal play at Portland (2-0) on Sunday.

Pacific: The Tigers play at Nevada (0-1) on Sunday.