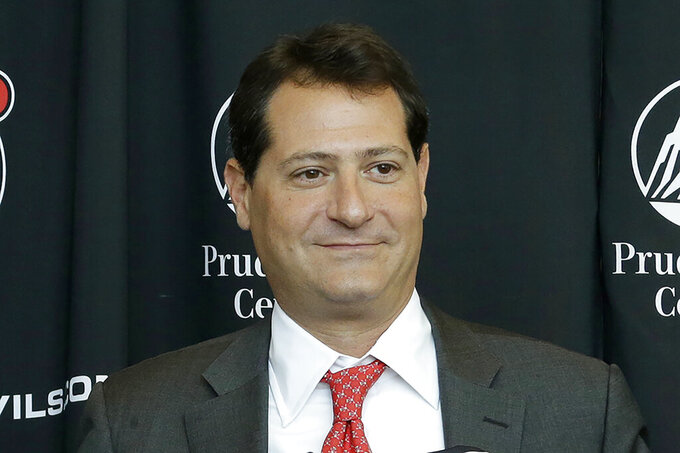 CLEVELAND (AP) — Their name changed, and now the Cleveland Guardians appear on the way to a switch in ownership.

Major League Baseball approved the sale of a minority stake in the team to David Blitzer, whose sports holdings include ownership shares in the NBA's Philadelphia 76ers and the NHL’s New Jersey Devils, two people familiar with the deal told The Associated Press on Thursday.

Blitzer initially will have 25-30% ownership and will have the right to increase his stake to a controlling interest in several years, said one of the people. Both people spoke on condition of anonymity because the deal has not been finalized.

Baseball Commissioner Rob Manfred announced approval of the sale at the conclusion of a three-day owners meeting in New York.

“We did approve a sale of a minority interest in the Guardians, pending the closing,” Manfred said. "Really excited about the change there.”

Manfred offered no other details and the team has not commented.

Guardians owner Paul Dolan has been seeking a minority investor in his franchise for several years. His interest began when previous minority investor John Sherman bought the Kansas City Royals for $1 billion in 2019.

In December, Dolan said the team had “meaningful discussions” with Blitzer, a 52-year-old equity investor and co-chairman of the 76ers and Devils. Blitzer is also a general partner with Crystal Palace Football Club.

Dolan hired New York investment bank Allen & Co. to help land a partner for his franchise, which has been plagued by poor attendance in recent seasons despite having a competitive team.

The Dolan Family bought Cleveland's franchise from Richard Jacobs in 1999 for $323 million. The team's payroll has dropped significantly in the past few years, from $135 million in 2018 to $42 million on opening day this season.

The Guardians are one of the majors' youngest teams, and an infusion of capital could allow the club to sign more of its younger players and be more aggressive in free agency.

Before this season, which is the club's first since changing its name from Indians to Guardians, Cleveland made long-term investments in several players, including All-Star third baseman José Ramírez, who signed a seven-year, $141 million contract.

The Guardians are currently 31-27 and in second place in the AL Central.