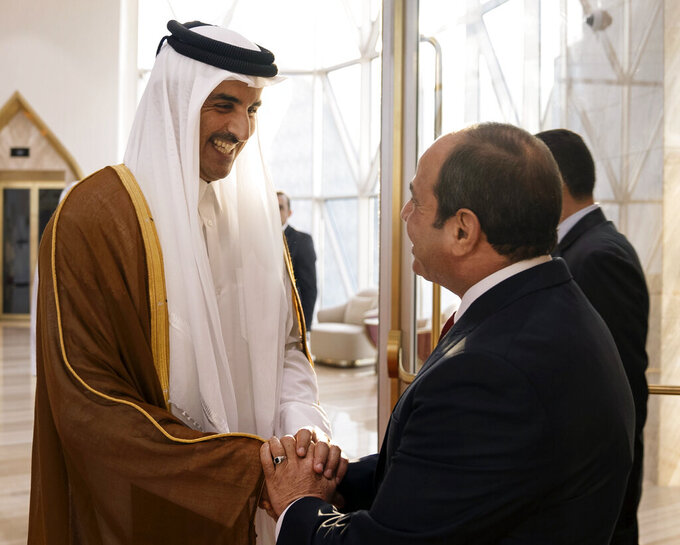 DOHA, Qatar (AP) — Egypt’s president met on Tuesday with Qatar's ruling emir during his first visit to the energy-rich nation after ties soured following the Egyptian military’s overthrow of an Islamist president backed by Doha.

The scene of President Abdel Fattah el-Sissi warmly shaking hands with Qatar's Sheikh Tamim bin Hamad Al Thani would have been unthinkable just years ago, when three Gulf Arab states and Egypt imposed a boycott on Doha over its sympathy to Islamists and other contentious issues.

But amid a rush of diplomacy over the last year, the countries have changed course. The dispute ended in 2021, when Qatar signed a declaration with the four to normalize relations. Qatar never ceded to the boycott's demands, which included that it shutter its Al Jazeera news network, expel a small contingency of Turkish troops from its territory and cut ties with the Muslim Brotherhood.

Since then, ties between Doha and the four Arab states have improved, and top officials have exchanged visits. In June, Sheikh Tamim visited Cairo, where he was welcomed at the airport by el-Sissi, a trip heralded as a thaw and possible end to long-running regional disputes over political Islam. The fault line has fueled conflict in Libya, Yemen and elsewhere.

Relations between Cairo and Doha frayed in 2013, when el-Sissi, as defense minister, led the military’s overthrow of Egypt's Islamist President Mohamed Morsi following a short-lived and divisive rule, and outlawed the Muslim Brotherhood. Morsi, who hailed from the Brotherhood, was backed by Qatar.