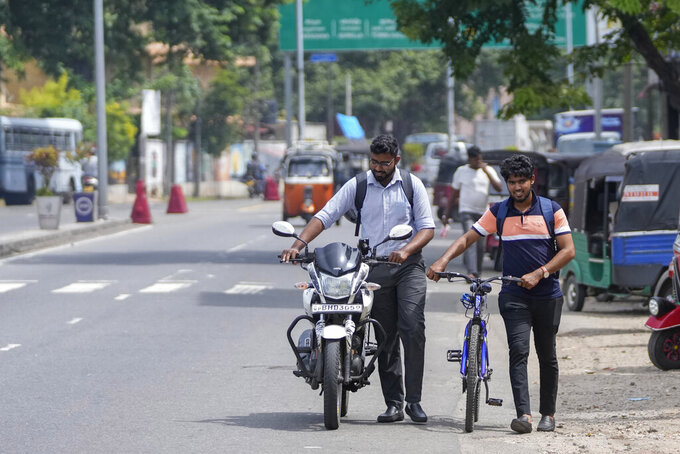 Eranga Jayawardena, ASSOCIATED PRESS
FILE- A motorist pushes his motorcycle along with a cyclist amid fuel shortage in Colombo, Sri Lanka, July 5, 2022. Sri Lanka’s central bank has raised its key interest rates to 14.50% and 15.50% to try to contain inflation that has added to the country’s economic woes. (AP Photo/Eranga Jayawardena, File)

COLOMBO, Sri Lanka (AP) — Sri Lanka’s Central Bank has raised its key interest rates to their highest levels in more than 20 years to try to contain inflation that has added to the country’s economic woes.

Recent price hikes have been a severe blow, especially for the South Asian country’s poor and vulnerable groups as they endure their country’s worst economic crisis in memory, struggling with acute shortages of essentials such as food, fuel, cooking gas and medicines.

Those rates were last that high in 2001.

The bank said it expects to tighten its monetary policy further to fully curb inflation, which rose to nearly 55% in June, while food inflation topped 80%.

The bank raised its policy rates by 700 basis points each in April, roughly doubling them and surprising economists as it struggled to drive inflation lower. Earlier, Fitch Solutions Country Risk & Industry Research forecast that it would push the Standing Deposit Facility Rate to 16.50% and the Standing Lending Facility Rate to 17.50% by the year’s end.

“Our priority is to bring down inflation to at least a reasonable level as soon as possible. The sooner the better,” said the central bank governor, Nandalal Weerasinghe.

Many central banks, most notably the U.S. Federal Reserve, have been raising interest rates to prevent inflation from spiraling out of control. But Sri Lanka faces troubles on a different scale.

“What the central bank has done is a measure in the right direction, but it's too short given the high inflation rate of 55 per cent right now which will accelerate to more than 80 to 100 per cent in the next two to three months,” said W.A. Wijewardena, an economist and former deputy governor of Sri Lanka's Central Bank.

Prices of most essentials have tripled in recent months and the most people are struggling to pay for their basic needs. About 70% of Sri Lankan households surveyed by UNICEF in May reported cutting back on food consumption. Many families rely on government rice handouts and charitable donations.

The central bank said Sri Lanka’s economy is estimated to have contracted 1.6% from a year earlier in the first quarter of the year. Shortages of fuel and electricity have further crimped economic activity in April-June.

Even though the economy already has slowed, the interest rate hikes would help temper expectations for further price increases, helping bring inflation down to a target of 6%-7%, the central bank said in a statement.

Due to the acute fuel and power shortages, Sri Lanka has kept schools shut for weeks, while the government has asked state employees other than those in essential services to work from home.

Strapped by dwindling foreign reserves, Sri Lanka has suspended repayment on foreign debts worth about $7 billion that were due this year.

The country is negotiating with the International Monetary Fund on a bailout package, but Wickremesinghe, the prime minister, said this week that negotiations were proving complex and difficult because Sri Lanka is effectively bankrupt.

The economic meltdown has triggered a political crisis, with widespread anti-government protests erupting across the country. Protesters have blocked main roads to demand gas and fuel, and television stations showed people in some areas fighting over limited stocks.

In the capital, Colombo, protesters have been occupying the entrance to the president’s office for more than two months to demand President Gotabaya Rajapaksa’s resignation. They accuse him and his powerful family, which includes several siblings who until recently held top government positions, of precipitating the crisis through corruption and misrule.