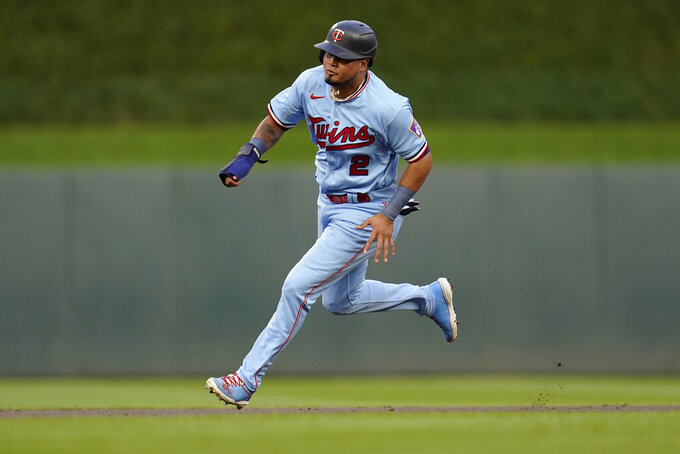 Gary Sánchez had a two-run double and Carlos Correa a couple hits for Minnesota, five games behind AL Central-leading Cleveland with 21 games remaining.

Arraez got an infield hit, raising his average to .320, and scored in the first, then left after the inning with left hamstring tightness. An MRI did not show “anything substantial,” according to manager Rocco Baldelli.

“My guess is we are going to, with the lefty tomorrow that we’re facing, probably let him come in, get some treatment and see how he responds, see what he’s going to be available for. I wouldn’t see him being out or anything like that,” Baldelli said.

The Twins already have a pair of regulars on 10-day injured lists: center fielder Byron Buxton out since Aug. 23 with a right hip strain and second baseman Jorge Polanco (left knee inflammation) has been out since Sept. 3.

Baldelli previously said Polanco might return this week, but Buxton is further away.

Acquired from Cincinnati in March, Gray (8-4) has been a top-of-the-rotation guy for Minnesota all season. He breezed through the Kansas City lineup much of the night, allowing three hits and striking out eight — seven looking.

“When you have a guy who has a really good breaking ball, as a hitter with two strikes, you have that in mind, like he might spin that breaking ball,” catcher Sandy León said. “Then he throws that backdoor two-seam to righties and from those lefties. … It’s not easy to execute it, but he does it.”

The right-hander has been especially strong for the Twins since the All-Star break, going 4-1 with a 1.98 ERA and allowing two or fewer earned runs in nine of those 10 starts.

“My curveball feels good, it’s always been something that’s been there for me. And my fastball command is getting better. And then starting to add a pitch here, add a pitch there, just along the way. … Whatever my strengths are, making sure my strengths, I’m really great at those and then just adding a little bit along the way,” Gray said.

Michael Massey had two of the five hits for Kansas City, which did not send more than four men to the plate in an inning against Gray. Through five innings, just one Royals runner advanced to second base and that came on a passed ball.

“He’s just tough because he can pretty much throw anything in any count,” Massey said.

Making his second start after missing 17 games with right forearm tightness, Zack Greinke (4-9) allowed three runs and struck out one in four innings.

Kansas City has lost six straight at Target Field and failed to score in 43 of its past 44 innings there. It scored three times in the ninth inning Tuesday after being no-hit for eight innings.

Greinke was done in by a 40-pitch first inning. Sánchez hit a two-out, two-run double and the Twins left the bases loaded when León grounded back sharply to Greinke.

“He didn’t execute the secondary pitches for strikes,” manager Mike Matheny said. “He’s usually getting more chase when he can throw strike to ball with the breaking stuff, with the changeup, but they weren’t biting.”

Kansas City SS Bobby Witt Jr. doubled for the fourth straight game. Eight of his past 13 hits have gone for extra bases. He leads all rookies with 53 extra-base hits.