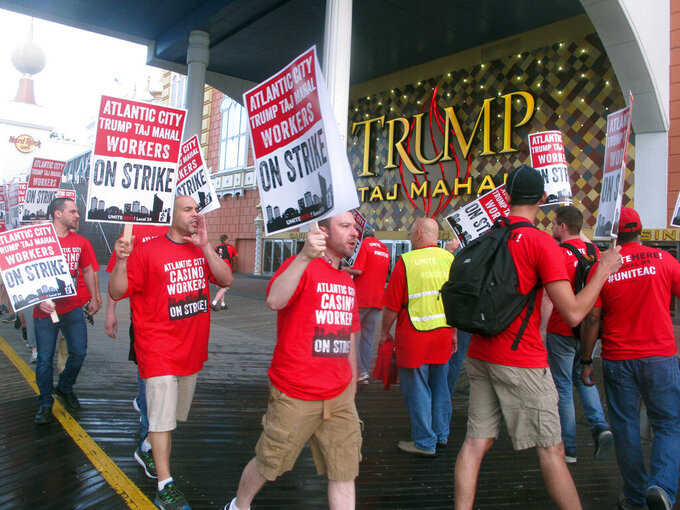 Wayne Parry, ASSOCIATED PRESS
Union members picket outside the Trump Taj Mahal casino in Atlantic City N.J. on July 1, 2016 moments after they began a strike against the casino. On May 20, 2022, the union launched a web site warning casino customers that "labor disputes" could happen if the casinos don't reach new contracts by the May 31 deadline. (AP Photo/Wayne Parry)

ATLANTIC CITY, N.J. (AP) — For people and groups planning to stay in Atlantic City, the resort's main union for casino workers is warning that “labor disputes” could occur if the casinos don’t agree to new contracts by a May 31 deadline.

The move comes at the start of what will be a crucial season for Atlantic City’s casinos in the third year of the ongoing COVID-19 pandemic.

The union’s goal is to keep workers from falling behind in an economy where labor shortages are increasing salaries in other industries, yet inflation is eating away at consumers’ purchasing power. Earlier this month, the union said it is seeking “significant” wage increases in the upcoming contracts to help its members recover from the financial harm caused by the pandemic. It did not specify the amount of increase it is seeking.

Local 54 of the Unite Here union set up the website actravelalert.org listing other hotels that have union contracts in place and which travelers might want to consider using if new contracts aren't reached or existing ones extended.

The website's home page features a large photo of striking union members picketing outside the former Trump Taj Mahal casino in 2016, a labor dispute that ended with the casino closing. It has since reopened under new ownership as the Hard Rock.

The union is in the midst of contract negotiations with the nine Atlantic City casinos. The website represents an increase in pressure on the casinos, even as it risks harming the atmosphere during ongoing talks.

“We're not threatening anybody,” said Bob McDevitt, the union's president. “But we're very serious about leveraging whatever we need to leverage to get our members a good contract.”

It was only last month that the nine casinos collectively surpassed the level of in-person gambling revenue they had before the pandemic started, although that result was due in part to extra weekend days in April 2022 compared with April 2019, and only five of the nine casinos posted higher revenue numbers over that period.

The casinos are counting on a strong summer to regain ground lost during the pandemic, which forced the casinos to close for 3 1/2 months in 2020, and kept operating restrictions in place until the middle of last year.

Executives representing five Atlantic City casinos did not respond to requests for comment Thursday on the union's latest tactic.

Local 54 is currently negotiating with Caesars Entertainment, which owns Caesars, Harrah's and the Tropicana, and MGM Resorts International, which owns the Borgata. It has reached agreements with the Ocean Casino Resort and Bally's to abide by the terms of the contract negotiated by the two larger casino companies, McDevitt said.

McDevitt said Caesars and MGM “need to be reminded” of what can happen during a labor dispute in Atlantic City, including a strike. Billionaire investor Carl Icahn closed the Taj Mahal in 2016 after the union went on strike because health insurance and pension benefits were stripped from its members by a bankruptcy court.

“The reality is there are very few people at Caesars and no one at MGM that has any kind of institutional knowledge of what a conflict can be like here,” McDevitt said. “They need to know what could be coming.”