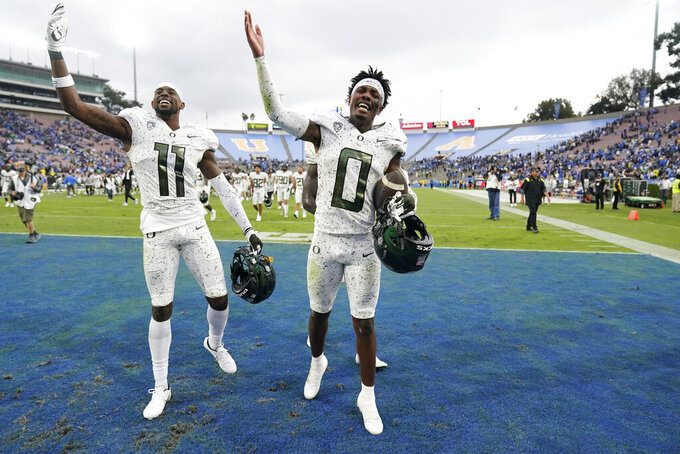 Here are some things to watch this week in the Pac-12 Conference:

GAME OF THE WEEK: Oregon State at California. Bowl-bound Beavers? Could be. A win would make Oregon State (5-2, 3-1 Pac-12) bowl-eligible for the first time since 2013. It could also push them into the Top 25, which would be the first time since that ’13 season. What’s more, a victory would keep things moving toward a high-stakes game with Oregon on Nov. 27 in Eugene — and possibly the Pac-12 North title. This will be the 74th meeting between Cal (2-5, 1-3) and Oregon State. The Bears lead the series 38-35. The Beavers rallied for a 31-27 win last season, scoring the decisive touchdown late in the fourth quarter. Oregon State enters the contest averaging a league-leading 35.1 points a game.

MATCHUP OF THE WEEK: UCLA at Utah. The Utes (4-3, 3-1) are coming off their first conference loss of the season at Oregon State. But they look to get back on track and take a step toward a Pac-12 South title against UCLA (5-3, 3-2). The Utes have won four straight over the Bruins. A win by UCLA would make the team bowl-eligible for the first time since 2017. The key number for the Bruins will be 20: They’ve won 58 consecutive regular-season games when holding opponents under 20 points. Their last regular-season loss when surrendering less than 20 was 16-14 at Colorado in 2003. The Utes will retire the number “22” during the game to honor running back Ty Jordan and defensive back Aaron Lowe. Lowe was killed in a shooting at a house party in September. Jordan died in an accidental shooting on Christmas Day 2020.

PLAYER TO WATCH: Oregon State RB B.J. Baylor. Earned Pac-12 offensive player of the week honors for a second time this season with a 152-yard performance in a 42-34 win over Utah. That included a 68-yard run in the second quarter, which was the longest play by an OSU player from scrimmage this season. His 10 rushing touchdowns lead the Pac-12. Another player to watch is Oregon State right guard Nous Keobounnam, who helped pave the way to a 260-yard rushing performance by the Beavers.

UPSET WATCH: Arizona at Southern California. The Trojans (3-4, 2-3) are 20 1/2-point favorites for a reason, according to FanDuel Sportsbook, with the Wildcats (0-7, 0-4) on a 19-game skid. But would anything be surprising given the way the Trojans’ season has gone? They've seen their coach fired and lost to Oregon State at the Coliseum for the first time since 1960. The Trojans have won their last eight games over Arizona. The Wildcats played Washington tough last week before a 21-16 loss.