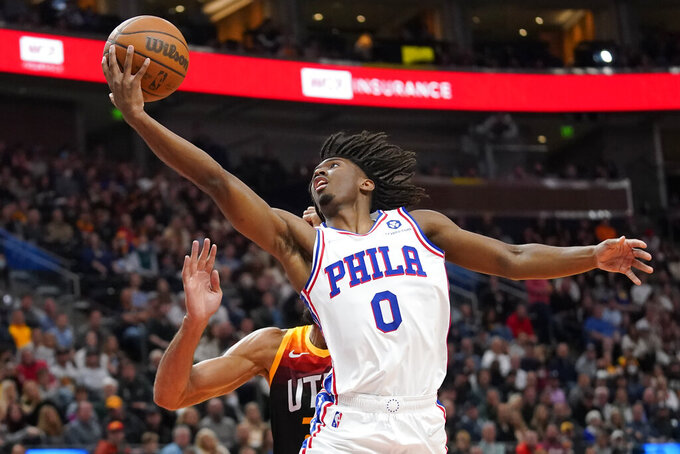 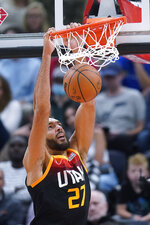 SALT LAKE CITY (AP) — Bojan Bogdanovic scored a season-high 27, including five 3-pointers, to power the Utah Jazz to a 120-85 rout of the depleted Philadelphia 76ers on Tuesday night.

“Everything starts with our defense and today we controlled the boards and that made it easy to get things going offensively,” Bogdanovic said.

The Jazz had lost four of five games and needed their traditionally tough defense to return. Against this version of the 76ers, it wasn’t clear how much of it had to do with Utah’s guarding prowess or Philadelphia’s ineptitude.

“We had more focus and we were aggressive. The last couple games, we have been kind of stagnant and we couldn’t hit any shots but this time everything started with our defense,” Bogdabnovic said.

The 76ers shot 37% and only grabbed six offensive rebounds off all those misses. That allowed the Jazz to get into their sets early and produce easy looks.

“I thought we took a lot of tough shots and tried to challenge Gobert. That was not a smart decision by us and they got out on the break,” Philadelphia coach Doc Rivers said.

Shake Milton scored 18 and Tyrese Maxey added 16 for the 76ers, who have lost five straight games for the first time since December 2017.

Joel Embiid and Matisse Thybulle remain in the league’s health and safety protocols and were not with the team. Embiid has missed five games now and Thybulle has sat six games, which has corresponded to a significant dip in defensive efficiency.

Utah went 11-for-19 from 3-point range in the second and third quarters combined to push the lead to as many as 31.

The Jazz went on a 14-0 run to start the second quarter. Clarkson’s peek-a-boo baseline jumper gave Utah a 44-28 lead with 8:10 left until halftime.

Later in the quarter, the Jazz expanded their advantage to as many as 23 points before the 76ers finally made a few shots to pull with 63-47 at the break.

Both teams have been reeling, going a combined 1-8 in the last 10 days so something had to give for one of them. Both teams pointed to their flagging defenses as the primary reason for their skids.

“One thing Doc said on the bench is we can’t be afraid to go 0-for-30. You got to shoot the next shot like it’s going to go in,” Isaiah Joe said. “Our defense could be better, no doubt, but we did miss a ton of wide open looks.”

76ers: Danny Green (left hamstring) and Ben Simmons (personal reasons) missed the game. ... Before the tip, the Jazz publicly wished Dave Joerger well in his fight against cancer. ... In his first game back after four seasons with Utah, Georges Niang, who had seven points, received applause when he entered the game midway through the first quarter and was honored with a video tribute during a timeout.

Jazz: Off-season free agent Rudy Gay has begun joining practices and may play later this week for the first time as a Jazzman. ... Gobert has collected 11 or more rebounds in 13 of 14 games this season. ... Utah outrebounded Philadelphia 56-42.

Utah coach Quin Snyder says getting an early shot is better than waiting for another later in the clock, especially if Bogdanovic is ready to shoot a 3-pointer.

“If everybody’s running and that generates a good look early in the clock, those are shots we want to take. I think we got a good chance of making them clean and early, even if it’s with 18 on the clock as opposed to 12. Sometimes if we pass up that shot, we may not get a better one in the possession,” Snyder said.

Clarkson, who never shy of shooting no matter how much time is on the shot clock, added, “That’s usually the result of us getting a stop, pushing the ball and hitting the first open man, who is usually open for 3.”

76ers: Play the third of six straight on the road at Denver on Thursday.