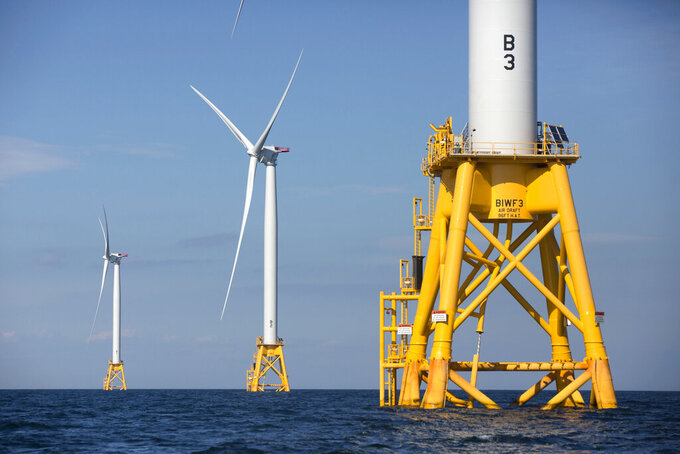 Michael Dwyer, ASSOCIATED PRESS
FILE - In this Aug. 15, 2016 file photo, three of Deepwater Wind's five turbines stand in the water off Block Island, R.I. On June 3, 2021, Atlantic Shores Offshore Wind announced a study with Rutgers University and the New Jersey clam industry of how offshore wind energy projects might impact the clam industry over the next 30 years.(AP Photo/Michael Dwyer, File)

ATLANTIC CITY, N.J. (AP) — A company hoping to build a wind power farm off the coast of southern New Jersey is partnering with Rutgers University and the state's clam industry to study the potential impacts of wind farms on the shellfish.

Atlantic Shores Offshore Wind, LLC said Thursday it is funding a $500,000 study of how New Jersey's valuable clam industry might be impacted by offshore wind farms over the next 30 years.

The study also will take the possible impacts of climate change into account.

It will also examine the economics of the clam industry in the lease area in which Atlantic Shores hopes to build its projects, as well as in the Mid-Atlantic Bight, a coastal region running from Massachusetts to North Carolina.

The study will use an existing computer simulator at Rutgers to model clam biology, along with fishery captain and fleet behavior, federal management decisions, fishery economics, port structure and wind farm development.

"We are looking forward to having our model take this next step towards future casting,” said Daphne Munroe, the study’s principal investigator and associate professor of Marine and Coastal Sciences at Rutgers.

Atlantic Shores is a partnership between Shell New Energies US LLC, and EDF Renewables North America. The joint venture plans to develop more than 183,000 acres located 10 to 20 miles off the New Jersey coast between Atlantic City and Barnegat Light.

Once fully developed, the area has the potential to generate over 3,000 megawatts of wind energy, enough to power nearly 1.5 million homes, the company said.

“We appreciate the willingness of the surf clam industry to actively participate with us in this effort,” said Jennifer Daniels, development director at Atlantic Shores. ”It’s through the application of tools like this simulator that we can responsibly develop our lease area and deliver renewable energy for New Jersey communities with minimized effects on the fishing industry.”

New Jersey utility regulators could decide as soon as this month whether to approve the company's proposal.