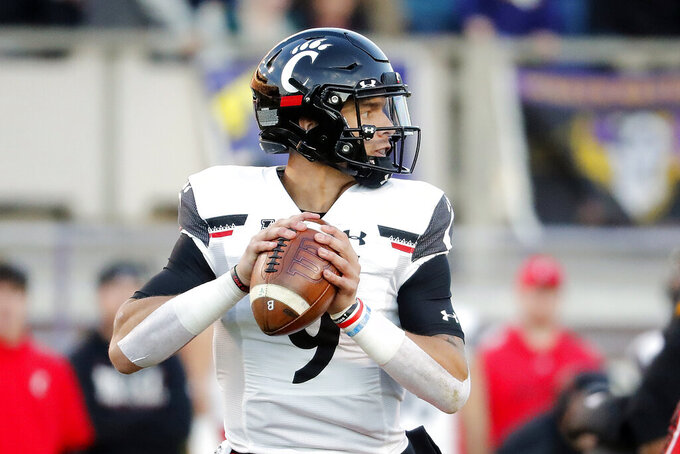 Karl B DeBlaker, ASSOCIATED PRESS
Cincinnati's Desmond Ridder (9) looks to pass the ball against East Carolina during the first half of an NCAA college football game in Raleigh, N.C., Friday, Nov. 26, 2021. (AP Photo/Karl B DeBlaker)

As AP Top 25 college football poll voter Brett McMurphy of Action Network pointed out, only six teams that went into championship weekend holding a top-four spot in the selection committee's rankings did not end up making the field.

In five of those cases, that team lost its conference championship game. Four of those five teams (Georgia in 2018, '19, Auburn in 2017 and Iowa in 2015) lost to teams that made the playoff and the other, Wisconsin in 2017, lost to an Ohio State team that finished fifth in the rankings that determine which four teams play for the national title.

The only team that won its final game of the regular season and fell out of playoff position was TCU in 2014. The Horned Frogs were third in the final rankings, blew out an Iowa State team that did not win a Big 12 game that season but ended up out after Ohio State won the Big Ten title against Wisconsin.

Back then there was no Big 12 championship game and Baylor and TCU “shared” the conference title, though Baylor beat the Horned Frogs in the regular season.

The committee, clearly torn over Baylor and TCU, found another option in Ohio State, which went on to win the national championship — though fans of those Big 12 teams are still chafed about the decision.

One notable upset came in 2019, when Utah was fifth heading into its Pac-12 title game against Oregon. The Utes weren't a slam dunk for the final spot, but with LSU and Georgia ahead of them and playing in the SEC title game, they had to be feeling good about their chances.

The Ducks won 37-15. After LSU beat Georgia, Oklahoma took the last spot in the CFP by winning the Big 12 title.

Heading into this weekend, No. 1 Georgia (12-0) appears to be in the field no matter what happens in its SEC championship game against Alabama. The Crimson Tide (11-1) is third in the CFP, but could in danger of falling out of playoff position with a loss to the Bulldogs.

Who are the agents of chaos? No. 15 Iowa, which faces No. 2 Michigan in the Big Ten title game, No. 16 Houston, which plays at CFP No. 4 Cincinnati for the American Athletic Conference championship, and No. 9 Baylor, the opponent for No. 5 Oklahoma State in the Big 12 championship.

Both the Hawkeyes and Cougars are 10 1/2-point underdogs, according to FanDuel Sportsbook. The Bears are a 4 1/2-point dog.

Bulldogs have lost six straight to the Tide, including two SEC title games and a national championship game ... GEORGIA 31-20.

First Big Ten title game appearance for the Wolverines, who have not won the conference since 2003 ... MICHIGAN 31-17.

Aztecs have allowed more than 21 points twice this season, and once was in an overtime game ... SAN DIEGO STATE 24-14.

Appalachian State (minus 2 1/2) at No. 20 Louisiana-Lafayette, Sun Belt championship

Kent State (minus 3 1/2) vs. Northern Illinois, MAC championship in Detroit

Follow Ralph D. Russo at https://twitter.com/ralphDrussoAP and listen at http://www.appodcasts.com