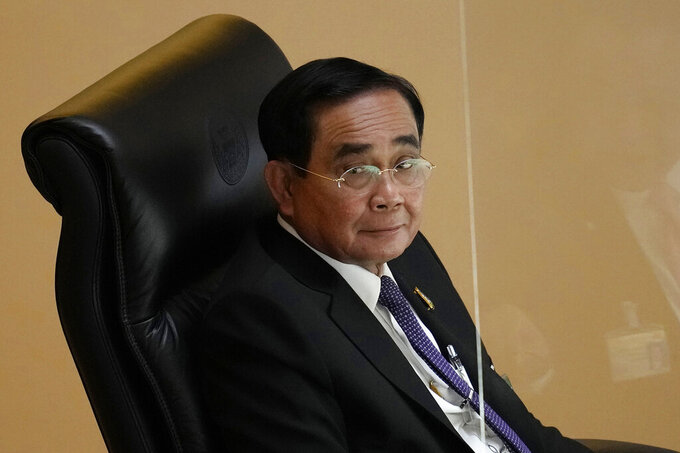 Sakchai Lalit, ASSOCIATED PRESS
FILE - Thailand Prime Minister Prayuth Chan-ocha attends a no-confidence debate at the Parliament in Bangkok, Thailand, on July 19, 2022. Thailand’s Constitutional Court announced Wednesday, Sept. 14, 2022, that it will issue a ruling on Sept. 30 on whether Prayuth has already served the eight-year legal limit in the position and must step down. (AP Photo/Sakchai Lalit, File)

Prayuth, then the Thai army commander, led a coup that ousted an elected government eight years ago, and critics who contend he came to power illegitimately say he has exceeded the term limit set by a 2017 constitution.

The court last month suspended Prayuth as prime minister pending its ruling on a petition signed by 171 members of the House of Representatives. The nine-member court said Wednesday it had sufficient witnesses and evidence to proceed to a ruling.

After the May 2014 coup, the ruling junta installed Prayuth as prime minister on Aug. 24, 2014, under an interim post-coup constitution.

The petitioners and critics of the government say, based on that date, he was legally obliged to leave office last month. Others contend the starting date of his time as prime minister should be the date the current constitution was adopted on April 6, 2017. Some argue that the countdown began on June 9, 2019, when Prayuth took office following a 2019 general election.

Prawit would be expected to take over the prime minister’s position if the court rules against Prayuth, though that is not a certainty. A new election must be called by March.

If Prawit takes over as prime minister, no changes in policies are likely, since he and Prayuth are both former army commanders and comrades in arms for decades backed by a political party set up as a proxy for military interests.

Prayuth’s critics also accuse him of retaining power illegitimately because his junta-imposed government passed election laws that handicapped its major opponents. He has also been accused of mishandling the economy and botching Thailand’s response to the COVID-19 pandemic.

However, the courts, like the military, are a key element of the nation’s ruling class, and consistently have turned back challenges to the conservative established order.