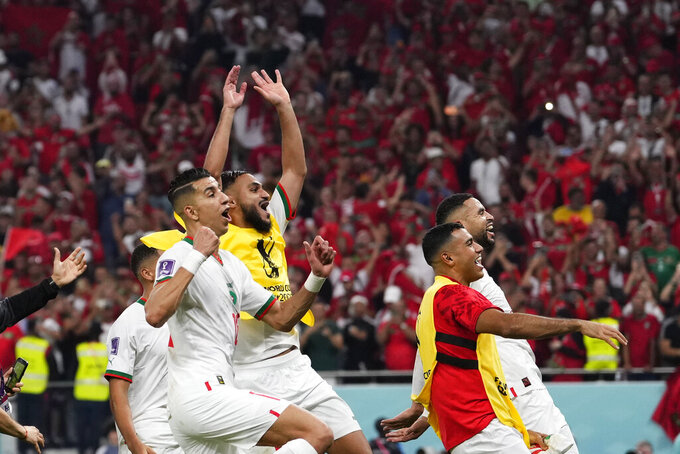 CEUTA, Spain (AP) — The World Cup knockout game between Spain and Morocco will bring millions of fans on both sides of the Strait of Gibraltar together around screens in bars and living rooms to see which country will keep alive its dream of soccer glory.

Nowhere will loyalties likely be more blurred than in Spain’s tiny North African territory of Ceuta where identities, both national and religious, often mix in unpredictable ways that confound the easy categories of sports fandom.

Sulaika Hosain, a 26-year-old Ceuta native, feels “100% Spanish,” yet when the game kicks off on Tuesday in Qatar, her sympathies will tilt toward Morocco, the land of her grandfather.

“I am a Spaniard and want Spain to win, but I am rooting for Morocco. ... When Morocco plays, something moves inside me," she said at the indoor playground where she works. "Let them win something, so people can say, ‘look, Morocco is not just a poor place.’”

Some World Cup games become supercharged with layers of political symbolism, such as the match between United States and Iran last week. Spain and Morocco are far from geopolitical rivals, but their long and complex relationship will no doubt be part of the backdrop to the game in Al Rayyan.

Ceuta, perched on an isthmus with a promontory historically considered the lesser of the Pillars of Hercules of antiquity, has been a Spanish possession since 1580. Its mixed population of Christians and Muslims, Spanish and Moroccan residents and day workers, live in relative harmony behind a border fence that many desperate migrants from across Africa see as their last barrier to a better life.

However, the city of 85,000 recently became the flashpoint of the biggest diplomatic crisis in recent memory between Madrid and Rabat.

In May 2021, the Moroccan government dropped its border controls and let thousands of young migrants from Morocco and sub-Saharan countries pour into Ceuta, which Morocco does not officially recognize as Spanish territory.

The move was interpreted as Morocco’s retaliation for Spain’s decision to allow a pro-independence leader from the disputed Western Sahara region to be treated for COVID-19 at a Spanish hospital. That, combined with a border closed by Morocco for two years to control the pandemic, damaged the economy on both side of the frontier. Tensions were only calmed and the border reopened after Spain’s prime minister met with Moroccan King Mohammed VI in April.

But for many people like Hosain, who live or work in Ceuta, the game won't tear them in two.

It is more like a win-win scenario: They will be happy for either Spain or Morocco to reach the quarterfinals and will pull for the winner to go all the way and lift the World Cup trophy in Qatar.

Mohamed Laarbi, 28, manages a bar in Ceuta that is showing all the World Cup matches. He is a third-generation Spaniard and is fully backing Spain. Regardless of the result, he does not expect the game to lead to any serious problems like the riots in Belgium and the Netherlands after Morocco beat Belgium in the group phase.

“Morocco is playing well, but when they meet Spain they will hit a wall,” he joked. “And then the game is over. That is it.”

Even so, Laarbi acknowledged that he and other Muslims from Ceuta or the other Spanish territory of Melilla further east on the coast are caught in an no-man’s land.

Morocco’s team is a reflection of the links with Spain, where Moroccans make up the single largest foreign community with 800,000 residents in a country of 47 million. Several Moroccan players play for Spanish clubs, including Sevilla striker Youssef En-Nesyri and goalkeeper Yassine Bounou. Talented right back Achraf Hakimi, a Paris Saint-Germain player, was born in Madrid.

For Mohamed Et Touzani, a 35-year-old hairdresser in Ceuta, the message is clear: just enjoy the game.

Originally from central Morocco, Et Touzani has lived in different parts of Spain for 15 years and said it is “like my home.” He has a house, like many people with Moroccan roots, across the border. He plans to watch the game with Spanish friends at what he called a “Christian” bar in Ceuta. He will cheer for Morocco.

“Soccer is soccer, and politics are politics. So we are going to play a soccer game and have a good time, but with respect. That is the most important thing," he said. "Morocco has red and green (in its flag), Spain has red and yellow. We have this in common. We are neighbors, and we must live like we were brothers.”