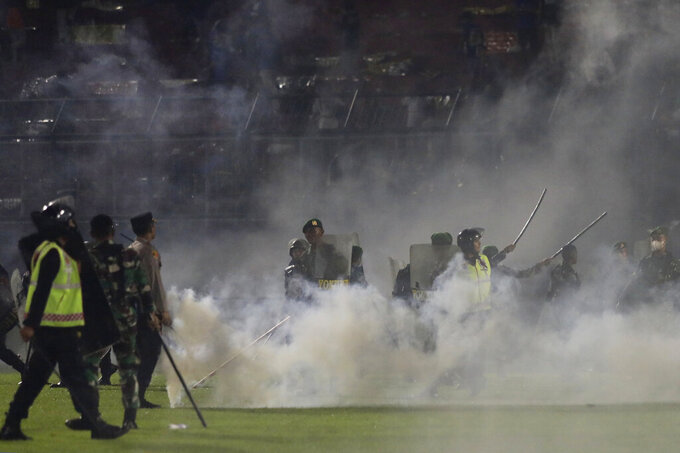 GENEVA (AP) — After a fatal crowd crush in South Korea and deaths at a soccer game in Indonesia, Qatar’s readiness for a health emergency at the World Cup was detailed Wednesday.

Public health experts in Qatar explained — in an online briefing hosted by the Geneva-based World Health Organization — their preparations for a tournament that is expected to attract at least 1.2 million visitors to the tiny emirate.

“Surprises happen but we are prepared as much as humanly possible for such events,” said Dr. Soha Al Bayat from the Qatari Ministry of Public Health.

“There were events that happened recently in other countries where there were injuries and there were casualties so, of course, we bear that in mind,” she said.

Public health experts describe soccer’s World Cup, which begins Nov. 20, as the biggest mass gathering of spectators since the start of the COVID-19 pandemic in 2020.

Though Qatar this week ended mandatory testing for international arrivals, Dr. Al Bayat said risk assessments were done of the “disease profile” in all 31 nations coming to play at the tournament.

“We have very strong surveillance tools, we have a big surveillance team,” she said, adding that in the event of “any outbreak anywhere in the world, we are on top of that.”

The briefing also focused on preparing for “mass casualty” events, after more than 150 people died in crowd crushes at a Halloween celebration last weekend in Seoul, South Korea. Public officials have apologized for the disaster.

One month ago, more than 130 soccer fans died at a domestic game in Indonesia amid panic made worse by police firing tear gas. At least eight fans died in a crush outside a stadium in January at the African Cup of Nations in Cameroon. Security failures including police using tear gas also marred the Champions League final in May in Paris.

“There will be crowds but it will be minimized,” Dr. Al Bayat said of Qatar’s eight World Cup stadiums, citing clear directions on match tickets telling fans which gates to use.

Up to 40,000 people can gather at Al Bidda Park in downtown Doha to watch games on giant screens and other entertainment at the official fan festival site that is a meeting hub for the World Cup.

Dr. Dalia Samhouri, a WHO emergency preparedness specialist in the Middle East, said extra training for such an incident at the World Cup was done after an assessment of Qatar’s medical facilities.

“We realized that a training on mass casualty management was needed in trauma care,” she said.

Qatari’s preparation for a major health incident was tested at the Arab Cup tournament last December and, after a post-tournament review, another simulation exercise in August.

The trial exercises also dealt with food and water safety, extreme weather and accidents, the online briefing was told.

Fans coming to Qatar have been advised, including on the health ministry website, to get travel insurance and up-to-date vaccinations for COVID-19 and influenza.

Qatar is making essential health care available for free at four public hospitals to holders of the tournament identification known as a Hayya Card.

“Qatar is one of the countries,” WHO’s Dr. Samhouri said, “that we can safely say that we have strong capacities.”