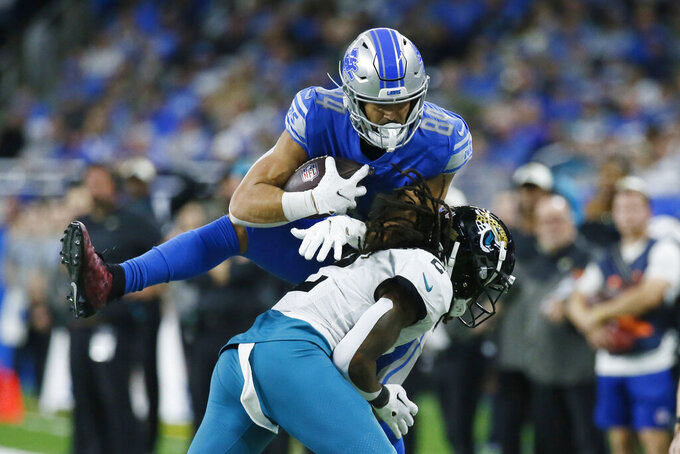 The Jaguars (4-8) are well on their way to becoming the NFL’s worst defense, and there doesn’t seem to be an explanation for the sudden decline. The young unit — Jacksonville starts two rookies and two second-year pros — has been downright dreadful in its past three games, culminating with a 40-14 loss at Detroit on Sunday in which the Lions never punted.

The Jags allowed an average of 446 yards in games against Kansas City, Baltimore and Detroit. They gave up first downs on 23 of 36 third-down conversions during that span, a staggering 64% success rate, and don’t have any answers despite spending considerable cash and draft capital to upgrade that side of the ball.

Maybe they’ll get a break Sunday at Tennessee (7-5), which ranks 29th in the league in total offense, but nobody should count on it.

Jacksonville’s linebackers look mostly lost in coverage, its defensive backs are often a step slow and its pass rush has been a season-long no-show.

None of those moves made a noticeable difference and now the Jaguars are on the verge of their 11th losing season in 12 years.

“We’ve just got to have conversations and be open and we’ve all got to be honest with what we’re doing and making sure we’ve got the right guys in the right spots,” Pederson said.

The better question: Do they have the right guys — or the right coaches?

Maybe most damning for the Jaguars is the lack of progress by their youngsters. No. 1 overall pick Travon Walker hasn’t notched a sack since October. Lloyd regressed after a solid September. Muma has been a mix of good and bad. Cornerback Tyson Campbell and safety Andre Cisco, both second-year pros, haven’t shown much improvement.

Trevor Lawrence’s connection with Christian Kirk is one of the few consistencies seen from Jacksonville. They hooked up six times for 104 yards against the Lions, giving Kirk 27 catches for 331 yards and three touchdowns in the last four games.

Slow starts have been a recurring theme for the Jaguars in recent weeks. They trailed 20-3 at Detroit a week after falling behind 6-0 to Baltimore, and the Ravens dropped two TD passes that could have made it 14-0. Before that, they were down 20-0 at Kansas City in Week 10 and 17-0 against Las Vegas in Week 9.

Jacksonville’s projected first-round draft position is on the rise. The Jaguars need defensive help, and after losing to Detroit, their projected draft slot is seventh overall. The floundering franchise has picked in the top 10 a whopping 14 times in the last 15 years.

Zay Jones dropped three passes a week after finishing with 11 receptions for 145 yards, both career highs. Two of his drops came on third-down plays in the first half, including one that might have resulted in a touchdown. Jones was contrite after the game and shouldered blame.

Lawrence had tests on his left foot on Monday to determine the extent of his injury. Pederson said, “I think things are trending in the right direction, but I won’t have a definite (answer) until I get the report later." ... Muma is considered day to day with an ankle injury. ... Cisco (shoulder) was inactive but should be good to go against the Titans.

8 — Number of consecutive losses at Tennessee. The Jaguars last won in Nashville in 2013, a 29-27 victory that Titans tight end Delanie Walker called “disgusting.”

Find something positive to build on defensively, a daunting task considering Jacksonville’s history against Derrick Henry and the Titans.