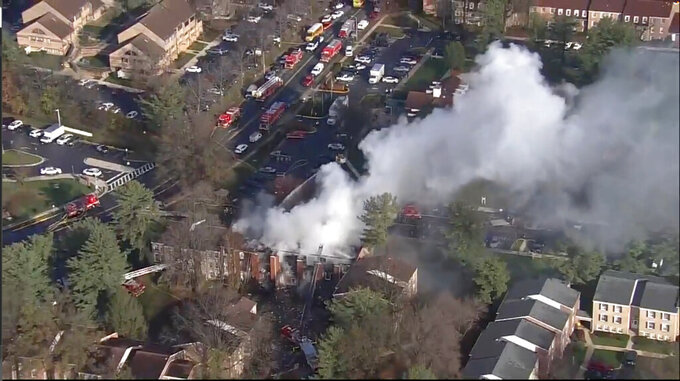 Uncredited, ASSOCIATED PRESS
Firefighters battle a blaze from a building that has partially collapsed Wednesday, Nov. 16, 2022, after a fire and an explosion, Montgomery County fire officials said. There were reports of people on balconies and several people were taken to hospitals with injuries that were not considered life-threatening, (WJLA via AP)

GAITHERSBURG, Md. (AP) — A fiery explosion that injured more than a dozen people at a Maryland condominium building was ignited by a resident who intended to kill himself and died in the blast, police said.

Authorities found the 36-year-old man's body in the rubble of his unit in the Gaithersburg complex a day after the explosion erupted on Wednesday, injuring at least 14 people and destroying or severely damaging nine units, news outlets reported.

Montgomery County Police Chief Marcus Jones told reporters on Friday that the man left a note and made statements to other people indicating he wanted to kill himself.

An autopsy found that the man died from burns and smoke inhalation, Jones said.

Authorities were investigating how the blast was ignited and whether the explosion or the fire occurred first.

Police received a missing-person report for the man about three hours after the explosion, but it didn't list the condominium building's address because relatives didn't know he was living there, according to Jones. The man bought a unit at the complex in August, Jones said.

“We have no information to believe that (he) intended for other individuals to be injured or harmed in this particular incident,” Jones said.

Ten of the injured people, including four children, were taken to a hospital. All 10 have since been released, officials said.

A woman who lived across the hall from the man who died in the explosion said he ignored greetings and kept to himself.

“He wouldn’t look at you,” Traci DiMartini told The Washington Post. “He was an awkward dude.”

DiMartini was at work in Washington, D.C., when the explosion demolished her home.

“The destruction was absolutely breathtaking,” she said.