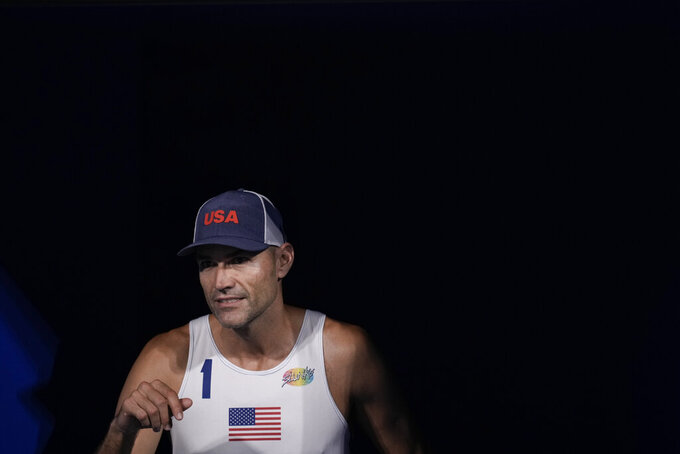 TOKYO (AP) — The Olympic beach volleyball tournament got off to the quintessential coronavirus-era start.

The event's very first scheduled match at the pandemic-delayed Tokyo Games was canceled on Saturday morning because a Czech player tested positive for COVID-19. That knocked Markéta Sluková, who tested positive earlier this week, and partner Barbora Hermannova out of the tournament.

Already empty because of the ban on fans, the venue at Shiokaze Park was eerily still when the match was supposed to start at 9 a.m. on Saturday, the only sound an ear-splitting drone from the cicadas in the nearby trees.

An hour later, when reigning gold medalist Alison took the court, he pointed at the empty stands to acknowledge the fans as if they were there, cheering him on.

“The feelings were different,” said the 6-foot-8 (2.03-meter) Brazilian who won the men’s gold medal in Rio de Janeiro. “The situation is very different in the world. (I am) very happy it is finally here.”

In a sport that thrives on its beach party vibe, with dance teams that did the samba on Rio’s Copacabana Beach or hammed it up to the Benny Hill theme in London, the venue overlooking Tokyo Bay struggled to match the mood of its predecessors.

A disc jockey pumped rock music through the speakers and called out the play-by-play. But for most of the session the only applause in the sweltering temporary arena — it was 90 degrees Fahrenheit (32 degrees Celsius), and hotter on the sand — was from the half-dozen ball attendants who clapped their plastic-gloved hands when the teams were announced.

“It was very different,” said Ágatha, a Brazilian who won a silver medal in front of her home crowd in 2016 and opened the Tokyo Games with a straight-set victory over Argentina on Saturday.

“In Brazil, we had the biggest support. There were many, many people cheering for us, and here we had silence,” she said, drawing a flat line with her hand. “We need to put our emotion in the game, because we can’t receive emotion from them. For me, it’s very important to play with emotion so I had to bring it from inside.”

Ágatha and her new partner, Duda, won 21-19, 21-10 on Saturday over Argentine pair Ana Gallay and Fernanda Pereyra. In other matches in the opening session, Alison and his new partner, Alvaro Filho, beat Argentina 21-16, 21-17, and top-seeded Canadians Sarah Pavan and Melissa Humana-Paredes beat the Dutch duo of Katja Stam and Raisa Schoon 21-16, 21-14.

“I mean, I think we can all agree there's something missing," said Pavan, who finished fifth in 2016. “We thrive in a full stadium with all the energy. But I think a strength of our team is we are able to manufacture energy ourselves as well.”

As she left the sand, Humana-Paredes waved to the handful of Canadian support staffers who were sitting among almost 12,000 empty seats.

“Even just seeing a couple of friendly faces makes a world of difference,” she said.

In the canceled match, the Japanese team of Megumi Murakami and Miki Ishii, who were 29th on the qualifying points list for the 24-team tournament but received the entry reserved for the hosts, earned the win by default.

Officially, the Czechs were marked as “Did Not Start,” and their three round-robin opponents will be awarded victories.

Sluková is one of at least four members of the Czech team who have tested positive since their arrival in Japan, including men’s beach volleyball player Ondřej Perušič. The team has said it’s investigating if the COVID-19 outbreak is linked to its charter flight to Tokyo.

A third beach player, American competitor Taylor Crabb, tested positive for COVID-19. But his partner, Jake Gibb, will remain in the competition with alternate Tri Bourne, who was able to make it to Tokyo in time.