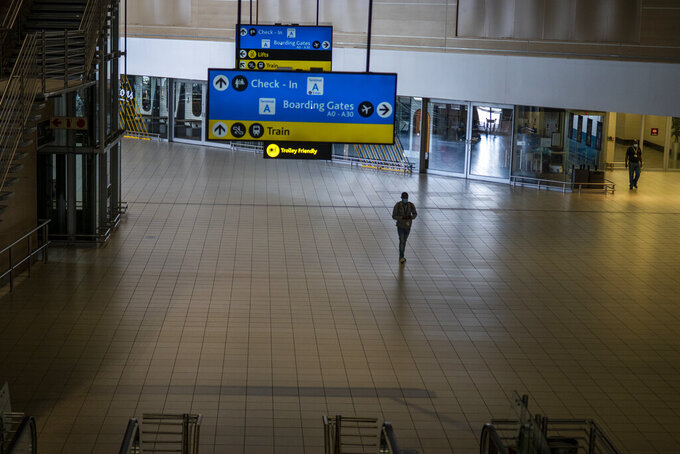 Jerome Delay, ASSOCIATED PRESS
A man walks through a deserted part of Johannesburg's OR Tambo's airport, South Africa, Monday Nov. 29, 2021. The World Health Organisation urged countries around the world not to impose flight bans on southern African nations due to concern over the new omicron variant. (AP Photo/Jerome Delay)

A new coronavirus variant revived old conspiracy theories this week as widely shared social media posts falsely claimed the omicron variant was nothing but a cover-up for darker agendas.

Some online personalities over the weekend suggested omicron was invented as an excuse to change voting laws, or as a distraction from this week's sex trafficking trial of longtime Jeffrey Epstein associate Ghislaine Maxwell.

Others baselessly claimed President Joe Biden made up the new variant to scare Americans, even as omicron, which was first identified in South Africa, hadn’t yet been detected in the U.S. as of Monday.

Here’s a closer look at the facts.

CLAIM: The government, Democrats or other powerful individuals made up the new omicron variant of the coronavirus to push for mail-in ballots in the 2022 midterm elections, distract from Maxwell's trial or scare Americans.

THE FACTS: The omicron variant is real and wasn't invented as part of a nefarious plot, despite the insistence of some social media users over the weekend.

“The Biden Administration and Dr. Fauci, seems to be making up new COVID strains, only to further scare Americans half to death,” one Facebook user wrote Sunday in a widely shared post.

“Here comes the MEV - the Midterm Election Variant!” read a tweet. “They NEED a reason to push unsolicited nationwide mail-in ballots. Democrats will do anything to CHEAT during an election - but we’re not going to let them!”

Another post that ricocheted across social media platforms claimed the omicron “hysteria” was strategically timed to distract news consumers from focusing on Maxwell’s trial.

These claims aren't based on evidence, and conflate unrelated events to promote opinions. They ignore that the virus was first reported by officials in South Africa and was identified by foreign health agencies before Biden addressed it. They also hinge on stale misconceptions: As the AP has previously reported, there is no historical evidence of widespread voter fraud through mail-in voting.

The resurgence of old conspiracy theories such as these is common in periods of uncertainty, according to Rachel Moran, a misinformation scholar at the University of Washington. She says these falsehoods can be attractive because we've seen versions of them before, and they allow us to mentally escape the reality that the virus is still a threat.

“The most recent variant is coming at a time when a lot of people are getting back to 'normal' — finally spending Thanksgiving with loved ones and making plans for Christmas — and the potential for a new wave of a dangerous virus is daunting and exhausting,” Moran said. “It’s unsurprising that people want to believe that it’s fake and engineered by government or Big Pharma as this means that they don’t have to deal with the potential of going backwards rather than forwards.”

Scientists in South Africa first detected the omicron variant last week after sequencing the genetic material of virus samples there. The World Health Organization labeled it a “ variant of concern " when it became clear that omicron had several mutations that could affect how it behaves or how easily it spreads.

The WHO warned Monday that the global risk from the omicron variant is “very high” based on the early evidence, saying the mutated coronavirus could lead to surges with “severe consequences.”

Biden, meanwhile, urged caution but not panic, since so much is still unknown about the variant. Researchers are still assessing whether it is more contagious, more likely to cause serious illness or more able to evade vaccines than other versions of the virus.

This is part of AP’s effort to address widely shared misinformation, including work with outside companies and organizations to add factual context to misleading content that is circulating online. Learn more about fact-checking at AP.