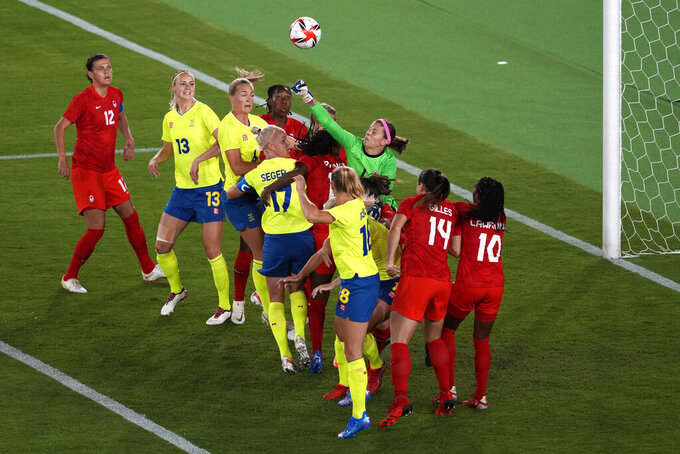 Christine Sinclair finally has her title.

The 38-year-old, long-time captain of the Canadian team has more international goals than any other player, male or female. But a major tournament championship had eluded her.

Canada clinched the Olympic gold medal by winning a penalty shootout 3-2 against Sweden after a 1-1 draw in Friday's final at the Tokyo Games.

It was the first major tournament title for the Canadians, who were the bronze medalists at London in 2012 and at Rio de Janeiro five years ago.

“I mean, it even looks prettier,” Sinclair said, holding up the gold medal.

Canadian goalkeeper Stephanie Labbe stopped Jonna Andersson in the shootout to make way for Julia Grosso, a 20-year-old player for the University of Texas, who beat Sweden goalkeeper Hedvig Lindahl to win it.

The Canadian players mobbed Grosso on the field, and Sinclair raised her arms in victory before leaping atop her teammates.

“I honestly cannot even believe what just happened,” said Sinclair, who has 187 career goals. “For the last 40 days, we had a goal to come in here and change the color of the medal and we landed on top of the podium. Just such an honor to be part of this group.”

It was the second consecutive silver medal for the Swedes, who were also aiming for their first title in a major tournament. They lost 2-1 to Germany at Rio in 2016.

Stina Blackstenius gave Sweden the lead in the 34th minute, but Jessie Fleming equalized with a penalty kick in the 67th before the game went to extra time.

Sweden had won every match going into the final, opening the tournament with a statement-making 3-0 victory over the United States. Blackstenius had a pair of goals against the Americans.

The Swedes advanced to the gold-medal match with a 1-0 victory over Australia, which finished in fourth place after falling to the United States 4-3 Thursday night in Kashima.

“I am trying to not feel it, wake up from this bad dream,” Sweden's veteran goalkeeper Lindahl said. “Congratulations to Canada, they defended well. That was our gold to lose.”

Canada coach Bev Priestman had said the target for this Olympics was to change the color of the medal, which the Canadians were assured of doing after their 1-0 semifinal victory over the United States. It was Canada's first victory over their North American rivals since 2001.

The final was originally scheduled for 11 a.m. Friday at the Olympic Stadium, but concerns about the heat — the forecast called for temperatures in the upper 90s at game time — forced organizers to move the game to 9 p.m. at Yokohama International Stadium.

Canada and Sweden both made requests to move the match out of concern for player safety. The request was only granted late Thursday, a move made easier because coronavirus restrictions kept fans away.

Sweden took an early advantage when Blackstenius' shot off a cross from Kosovare Asllani appeared to glance off Canada's Gilles before sailing past Labbe's outstretched arms.

It was her seventh career goals in the Olympics, including five in Japan.

Sinclair appealed for a penalty after Amanda Ilestedt clipped her with her left foot from behind. After a VAR review, Canada was awarded the penalty and Fleming duly made it 1-1.

Sweden had a chance to go ahead late in regulation but Kadeisha Buchanan got to Asllani's shot just in time in the 89th.

Lina Hurtig let out a scream, heard throughout the empty stadium in the 111th minute, when she missed just wide with a header off a corner from Asllani.

Fleming made Canada’s first kick in the shootout, but Ashley Lawrence, Vanessa Gillies and Adriana Leon all failed to convert.

Asllani hit the post with Sweden’s first kick, and Nathalie Bjorn and Olivia Schough built a 2-1 Sweden lead. Anna Anvegard's shot was saved by Labbe and, with a chance to win the gold, Caroline Seger sent her kick over the crossbar.

Canada's Deanne Rose made it 2-2 before Andersson’s next shot for Sweden was saved by Labbe, diving to her left.

“The Olympics is wild. There’s games back-to-back-to-back, but it's been really incredible," said Canada midfielder Quinn, who became the first openly transgender person to compete in the Olympics. “This team has been working so hard together for so long. These are my best friends, my best mates, and so honestly, it's been a blast.”

Sinclair joked about how she felt her 38 years following a grueling match, but she wouldn't say whether it was time to hang up her boots.

“I headed into this tournament knowing I'm not making a decision out of joy, or sadness, depending how this tournament went,” she said. “It's not how I make decisions. So who knows? I mean, there's a World Cup out there.”