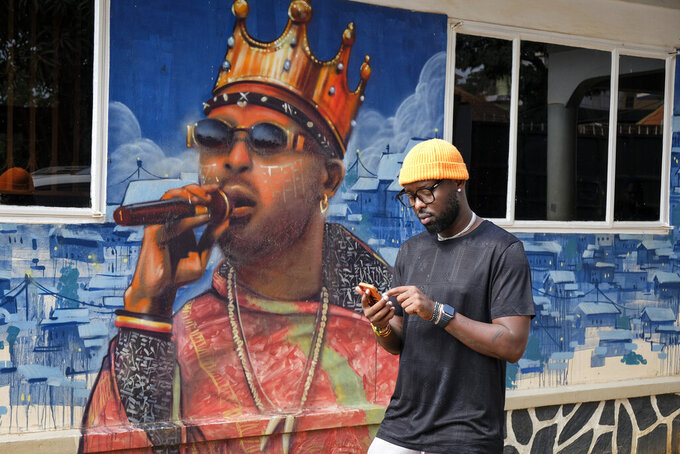 Hajarah Nalwadda, ASSOCIATED PRESS
Ugandan singer Eddy Kenzo walks outside his studio in the Makindye area of the capital Kampala, Uganda Friday, Nov. 18, 2022. Kenzo, whose real name is Edirisa Musuuza, became the first Uganda-based singer to earn a Grammy nomination and keeps scaling heights that defy his expectations and those of his fans and rivals. (AP Photo/Hajarah Nalwadda)

KAMPALA, Uganda (AP) — Eddy Kenzo doesn’t know precisely when he was born, a quirk of personal history that goes to the heart of how the Ugandan singer sees himself: a humble man who's sometimes anxious about what happens next.

And yet Kenzo, who became the first Uganda-based singer to earn a Grammy nomination, keeps scaling heights that defy his expectations and those of his fans and rivals in this east African country where his work is sometimes questioned.

Some Ugandans dismiss his musical style as rather playful, saying he's not that much of a singer. But others see in his experimentation the creative potential that marks him as an artiste with original gifts.

For Kenzo, any recognition of his work is a reminder of how far he's come.

“Honestly speaking, I am so overwhelmed. I am so nervous at the same time,” Kenzo said in an interview with the AP, speaking of his nomination. “I thank God that we made it.”

Kenzo’s “Gimme Love,” a collaboration with the American singer Matt B that began with a fortuitous meeting in Los Angeles, is nominated for a Grammy in the category of best global music performance.

Kenzo, whose real name is Edirisa Musuuza, won a BET award in 2015 as the viewers’ choice for best new international artiste, the first and only Ugandan so honored to date. The accolade followed his breakout song “Sitya Loss,” accompanied by a video featuring dancing kids whose energetic performance captured the attention of global stars like Ellen DeGeneres.

That song was a nod to Kenzo's own humble beginnings in a remote part of central Uganda, as a barely literate child who didn’t know from where his next meal would come. By his own account, Kenzo spent 13 years in the streets after losing his mother when he was only 4. He didn't know who his father was, and he only discovered some of his siblings as a grown man.

He wanted to become a soccer player and even won a scholarship to boarding school based on his talent, but he later dropped out and returned to the hustling that he says made him a man.

“I am a hustler,” he told AP. “This is a very huge step for me, my family and the ghetto people, the hustlers, the people who come from nothing. It gives us a lot of hope that anything is possible.”

He recorded his first single in 2008 and achieved stardom in 2010 with the song “Stamina,” beloved by politicians, lovers, and others for its praise of youthful energy. In addition to winning awards, Kenzo is frequently invited to perform across the world.

Three days before he found out he had been nominated for a Grammy, Kenzo held a festival in Kampala that was attended by thousands, including Uganda's prime minister. It was a proud moment for a singer whose music is often ignored by local FM stations, which can make or break a song with the choices DJs make.

There's a sense even for Kenzo that he's more appreciated abroad than at home.

"My biggest fanbase is outside Uganda, because the world is bigger than Uganda,” he said thoughtfully. “Uganda is just a small country.”

Andrew Kaggwa, an arts reporter with the local Daily Monitor newspaper, described Kenzo as an enigma who “has disrupted the industry in ways no one can explain."

He spoke of Kenzo as the Ugandan singer "who refused to fail.” DJs may dislike his music, but he has a loyal following and he wins honors despite the odds.

“For some reason things happen” for Kenzo, Kaggwa said. “He just lets the awards, the accolades, speak for him.”