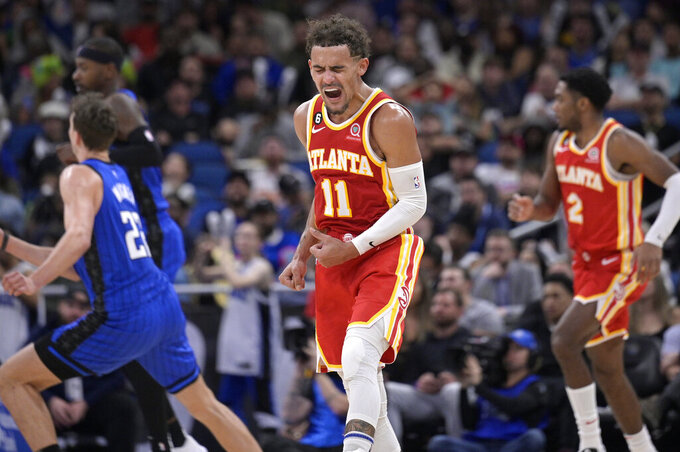 ATLANTA (AP) — Trae Young says he and Hawks coach Nate McMillan have smoothed over their disagreement regarding his not attending a game last Friday.

Young, the team's leading scorer, was out with a sore shoulder and did not attend the game the win over the Denver Nuggets. It is rare for an injured player not to attend a home game.

“I mean, it was just a situation,” Young told reporters after Monday's morning shootaround. “I mean, we’re all grown men here and there’s some times we don’t always agree. And it’s unfortunate that private situations and private conversations got out to the public. But I guess that’s the world we live in now.

“But yeah, I’m just going to focus on basketball and focus on helping my team win. And that’s what I got to be focusing on.”

Young, who was in the lineup for the Hawks' game against Oklahoma City, declined to take questions before the game, but McMillan told reporters before tipoff that he addressed the team and spoke with Young after the morning shootaround.

“Trae is a very competitive kid,” McMillan said. “He understands. We both want the same thing, which is to win games. Again, things happen. We’re not going to agree on everything. That happens in your family, too, right? It’s not always going to be a perfect situation. He’s going to be fine.

“He is a 24-year-old man that has a ton of talent. He wants to win big. I want to win big. We’re going to continue to work on ways to try to make that happen.”

When Young said he would not participate in the shootaround, McMillan said he could either come off the bench or miss the game entirely. Young opted for the latter, and the team listed him as inactive with the shoulder injury.

Young, who led the NBA in total points scored and total assists last season, was upset that the details went public.

“Like I said, it’s a private matter,” he said. “Again, made public, which is unfortunate. And if it was to stay private, it probably wouldn’t have been as big of a deal. But like I said, it’s unfortunate and my job, and my goal is to win championships. And that’s what I focus on.”

McMillan wanted to clarify that he never told Young to skip the game.