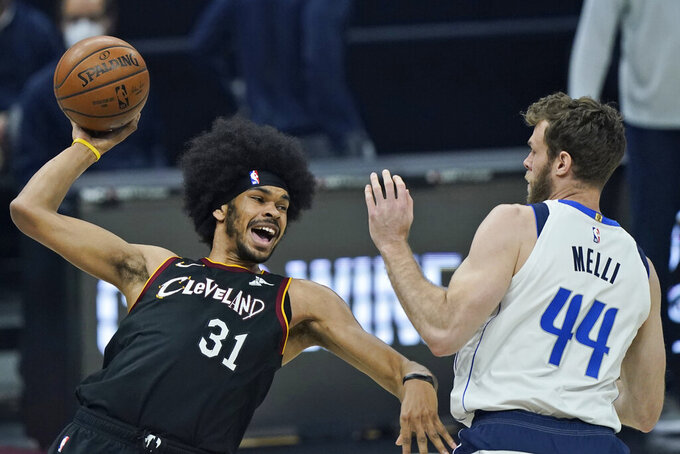 Tony Dejak, ASSOCIATED PRESS
FILE - In this May 9, 2021, file photo, Cleveland Cavaliers' Jarrett Allen (31) tries to pass the ball against Dallas Mavericks' Nicolo Melli (44) in the first half of an NBA basketball game in Cleveland. The Cavaliers signed Allen to a five-year, $100 million contract on Friday, Aug. 6, 2021, securing the 23-year-old center as one of their foundational players. Allen, who came over in a mid-season deal from Brooklyn, was a restricted free agent before coming to terms with Cleveland earlier this week. (AP Photo/Tony Dejak, File)

CLEVELAND (AP) — When they traded for Jarrett Allen, the Cavaliers knew they were getting a quality player.

He quickly became much more than that.

The Cavs signed Allen to a five-year, $100 million contract on Friday, securing the 23-year-old center as one of their foundational players. Allen, who came over from Brooklyn in a midseason deal, was a restricted free agent before coming to terms with Cleveland earlier this week.

“We spent the last few years maintaining our financial and roster flexibility to put ourselves in a position to acquire and now re-sign a player of Jarrett’s caliber,” general manager Koby Altman said. “Since his arrival, Jarrett has fit seamlessly into our culture and almost instantly, he earned the respect of his coaches and teammates.

"We took another positive step forward in our pursuit of sustainable success with this signing, as we see Jarrett as an integral piece of our future moving forward.”

Allen posted career highs in points (12.8) and rebounds (10.0) in 63 games — 45 starts — for the Nets and Cavs last season. He finished among the league leaders in field-goal percentage and blocks and impressed Cleveland's coaches with his toughness at the rim.

Allen is part of a promising core of young players with the Cavs. The team is particularly excited about the potential of playing him alongside Evan Mobley, the former USC big man taken third overall in the NBA draft by Cleveland.

"It can’t be overstated enough that the coaching staff and front office wanted me to be in Cleveland long-term,” said Allen. “We have some really talented, young and hungry players in this locker room and I can’t wait to get back on the court with them to see how far we can take this thing.”

On Feb. 1, Allen became the first player in team history with 23 points, 18 rebounds and five blocks in a game. Three weeks later, he became just the eighth player in league history to get 25 points and 15 rebounds without missing a single field-goal attempt.